Back in 2017, Allina Health Mercy Hospital had a problem. The Minnesota health care location had simply run out of space. The solution involved relocating and enlarging the main entrance, reconfiguring the hospital’s interior and adding a parking garage.

To coordinate the large project, Mercy Hospital partnered with HDR architectural firm and Knutson Construction. Using an Integrated Project Delivery (IPD) process, the team was able to accomplish all the construction goals, including new operating rooms on the upper floor and other key additions. 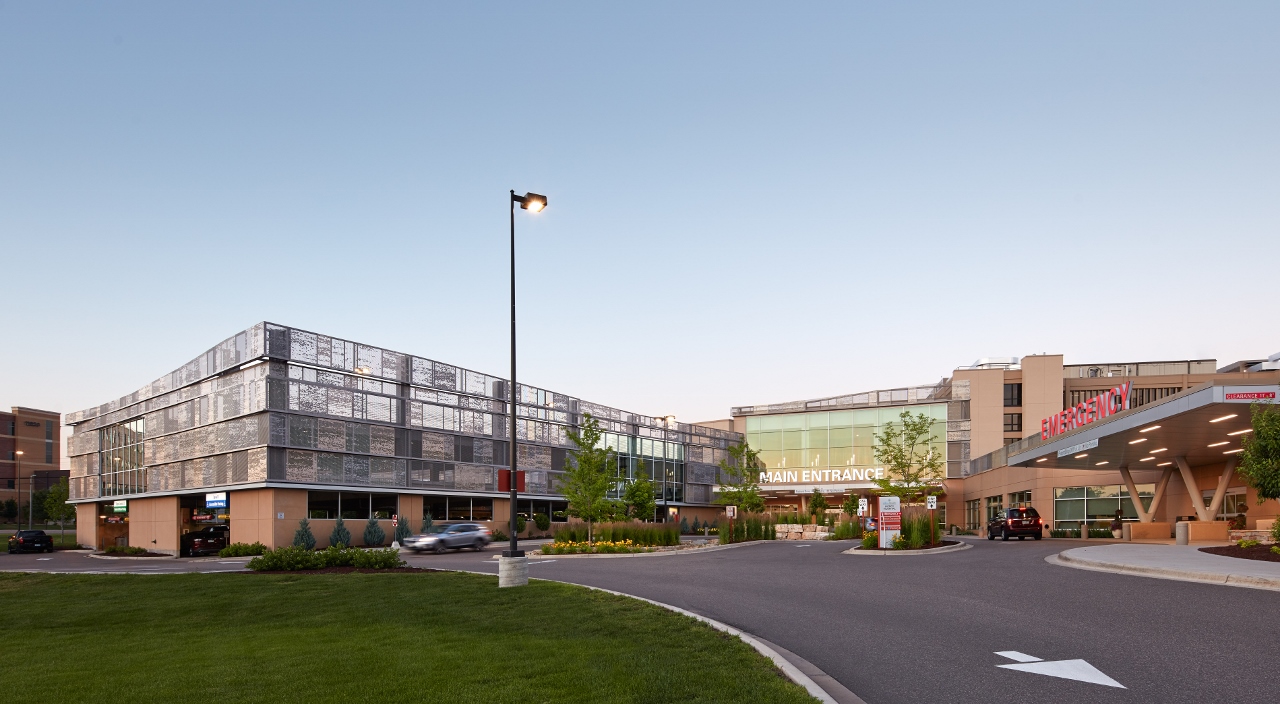 “Mercy Hospital was literally busting at the seams,” says Isaac Bros, AIA, NCARB, project architect with HDR’s Minneapolis Studio. “We found the best solution was to relocate the front entrance to the opposite side of the campus. After that, the emergency department was expanded and new surgical areas were added. While all this was going on, it was important to maintain and strengthen the program adjacencies and flow of the hospital.”

The Mercy Hospital expansion was an enormous project, involving 168,000 square feet of space.  The design team at HDR worked with the construction team to complete the complex, seven-phase project at the Coon Rapids, Minn. location. Within those seven phases, there were 47 sub-phases of the project, resulting in a massive undertaking. Part of the project included adding a new medical surgical floor, renovating the ICU floor and expanding the registration and waiting areas.

Four different roof plans were created for the new structure. On and off, it took Central Roofing Company almost three years to complete the roofing work.

Tricky Roof Challenges
As the massive undertaking launched, Knutson Construction was brought in to build a new operating addition, central utility area and a parking ramp to a 300-space parking garage. The exterior of the structure was remodeled, and new roofing was needed in many locations.

“We hired Central Roofing Company to connect the older roofing sections with the new roof areas,” says Rodney Sessing, senior superintendent at Knutson Construction. “We’ve worked with Central Roofing in the past on a variety of other projects. We had confidence their crews and service teams were the perfect fit for this project. 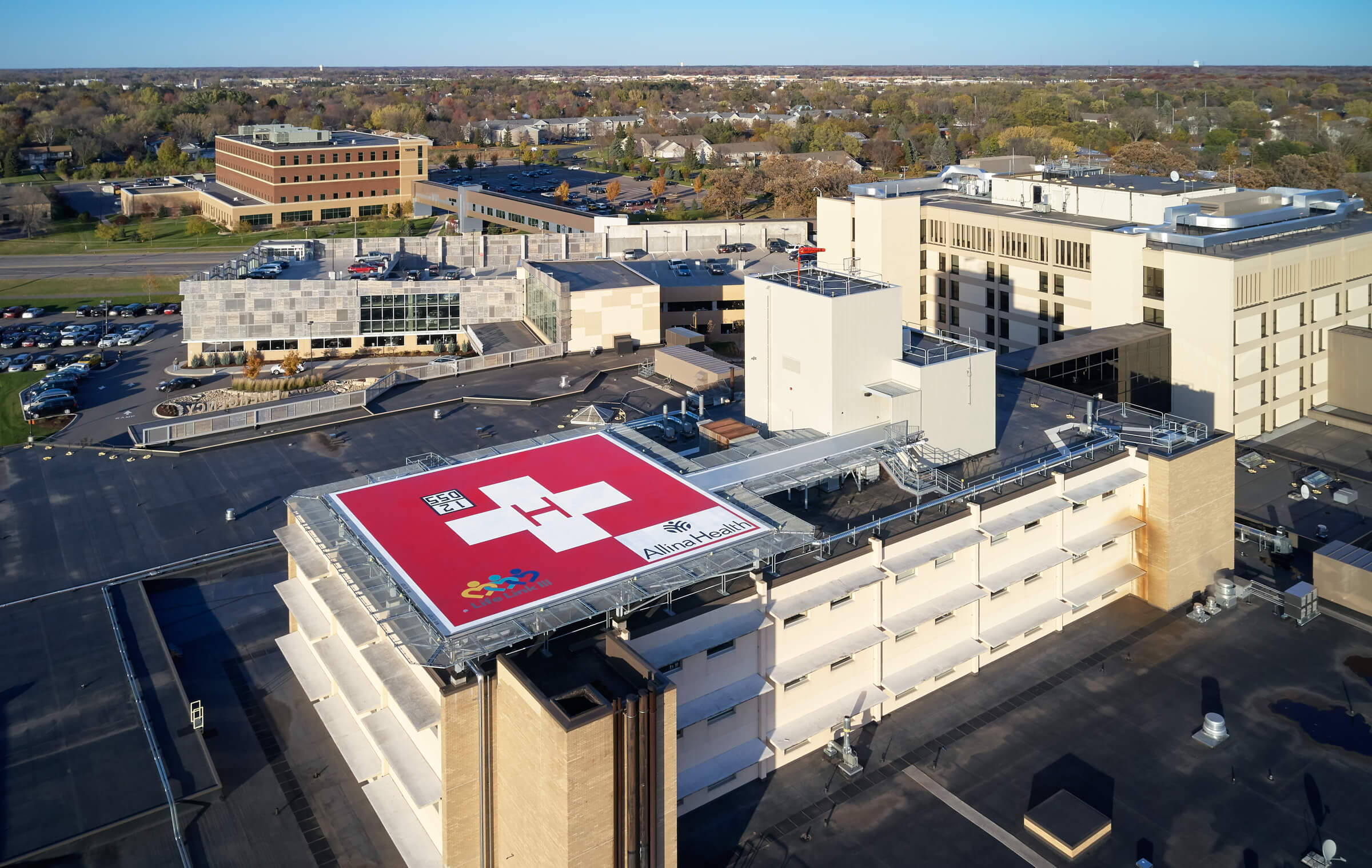 “During the scope of this project there must have been at least 100 new openings made in existing roofs. Central Roofing was there for each one of them and did a great job.”

According to Bros, the challenging project benefitted from the roofing solutions offered by the Central Roofing team. “The roof was critical to this project,” says Bros. “Tying new and old roof elements to the hospital harmoniously was tricky and vital. The roof needed to maintain the proper drainage, expansion and contraction --- all while meeting the latest energy codes.

“Central Roofing reworked the drainage to provide a better solution for the hospital long term.”

Juggling Roofs and Tradespeople
For the initial new roof areas, concrete decks were installed. Johns Manville primer and a vapor barrier were added. Polyiso insulation layers were put in place, then gypsum cover board in low rise foam adhesive. A 60 mil black non-reinforced EPDM membrane was then fully adhered to the cover board. The same EPDM system was installed on two roof canopies. Johns Manville Expand-O-Flash expansion joint cover was used for all expansion joint details.

“After the expansion portion of the project, we had to do detail work on the older building to make the old and new roofs unified,” says Jay Sessing, roof technician at the Service Department with Central Roofing Company. “As the project progressed, we used core drillers on the concrete decks for the multiple penetrations. Every time a trade person had to gain access to the roof to work on the project below, we were right there.

“We probably dealt with 30 different people on this project. There were tradesmen, construction team members and the Mercy Hospital staff. Every time the roof had to be penetrated, we’d work with electricians, plumbers, HVAC teams and mechanics. We all had the same goal of creating the best roofing system possible to top the structure.” 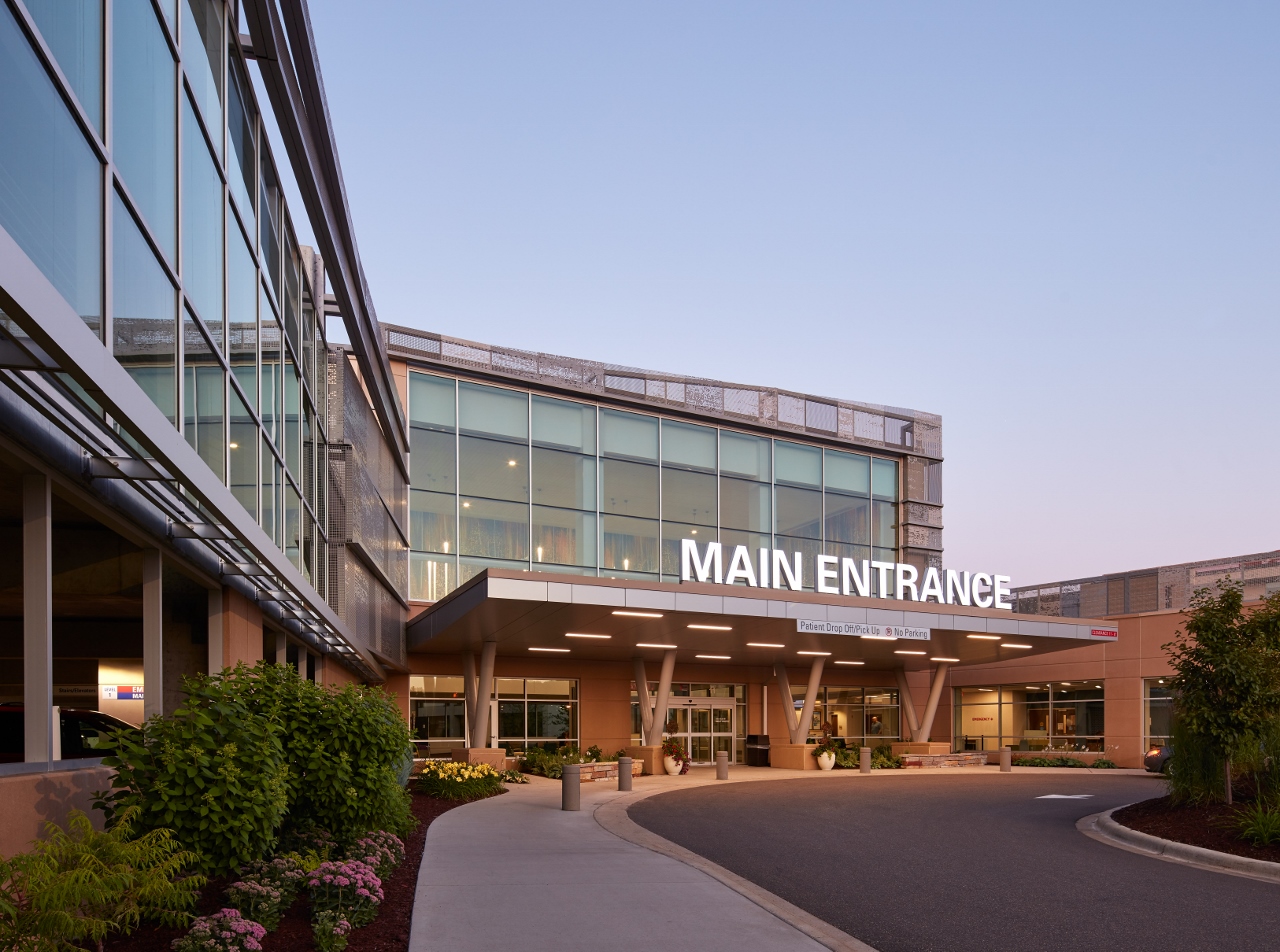 Round 2 – Returning to Mercy Hospital
Following the successful completion and opening of the new Mercy Hospital, the Central Roofing team was called back in 2019. This time for a 7,500-square-foot temporary roof over a temporary entrance for the Emergency Department (while a new Emergency Room and entrance were being added), and to correct roof drainage and ponding issues on existing roofs.

“This was a relatively small project compared to the original project, but it was still important for the hospital,” says Kyle Forrey, project manager for Knutson Construction. “We relied on the expertise of the drafting department at Central Roofing for input and alternative ideas on how we could tie in with the existing roof.

“The different options Cindy Hillegass with Central Roofing provided us with in the shop drawing stages gave us confidence. With those drawings we were able to choose the best path forward to reduce the chance of water infiltration during the roof tie-in work.”

Working Together
Now complete, the collaborate partnership labeled “Mercy-ALIGNED” by HDR, has resulted in an outstanding hospital.

“We were able to all complete this project by working together as a fully integrated team,” says Bros with HDR. “We had a multidisciplinary team of architects, health care consultants, clinical partners, designers, engineers, specialists, estimators, schedulers, constructors and trade partners all focused on the same goal. We had an expansive vision for this project. In the end, Central Roofing helped us attain that vision by providing roofing solutions to all the expansion and additions of Mercy Hospital."