The new 707 Fifth "AAA" office tower in downtown Calgary, Alberta, features a distinctive, curved glass appearance with high energy-efficiency and a comfortable interior. In spite of the cold climate, the 27-story, 564,000-square-foot building met its energy targets, due in part, to the use of Technoform's TGI Spacer M in the triple-glazed, curtain wall system. The project is designed to achieve LEED Gold certification through the Canadian Green Building Council.

The building's lead tenant is PetroChina, whose employees and visitors have a choice of nearby transit solutions and a breadth of on-site amenities, retailers and restaurants. The soaring 30-foot-tall lobby and interconnected winter garden provide an attractive, year-round setting.

Clarity Architectural Products introduced TNG to the 707 Fifth project team as its preferred supplier for the building envelope, capable of fabricating the sophisticated, bent, multi-pane, insulating glass in custom shapes, large sizes and at the high level of quality specified. In total, TNG supplied 220,000 square feet (20,400m²) of glass to Contract Glaziers West, which fabricated the curtain wall in its Windsor, Ontario, facility then transported the system to Calgary for installation on the project.

"TNG was one of the few glass manufacturers willing to accept the challenge of producing IGUs with custom low-e coatings, such that they looked the same whether in the concave or convex orientation," explained Technoform's Helen Sanders, PhD. Technoform's TGI Spacer-M serves as the standard for TNG and its large, premium insulating glass products.

"Using Technoform's spacer for this application came from a recommendation by the Tianjin North Glass team," said Contract Glaziers West's Steve LeBlanc. "We affirmed their preferred spacer solution via our thermal modelling for the project, thus establishing that it would provide the performance values we required."

The thermal performance requirements of 707 Fifth included stringent whole unit U-factors of 0.91 W/m²K (0.16 hr/ft²F), according to Dirk Schulte, formerly with TNG. He said, "TNG proposed Technoform due to its unique portfolio of spacer systems, providing the ideal product solution for this high-end glass unit."

LeBlanc continued, "Due to Technoform's industry reputation as a leader in providing thermal IGU spacers, thermal breaks and isolators, the product was readily accepted into the design. Overall, with the two layers of high-performance low-e and the warm edge spacers provided, we were able to achieve the wall performance desired by the design team and consultants."

Before beginning construction in 2014, EllisDon's virtual design and construction team produced three-dimension conceptualizations using building information modeling (BIM) tools. According to the construction manager, this visualization of the project led to "a complex, yet achievable coordination process" guiding the way to its successful conclusion.

Reiterating the key aesthetic goals for the 707 Fifth, LeBlanc described, "The façade had a geometry of both concave and convex radius glazing, as well as the east and west elevations' inverted slope from ground level to the top of the building. All flat and curved glass had to match in color and performance as per the design specifications."

Schulte complimented the solution: "Technoform's hybrid spacer, made of engineered plastic and a strong supporting stainless steel cover, has been extremely helpful to smoothly fabricate the curved and triple-insulating units with concave and convex shaped bends – without incorporating any additional stresses around the perimeter edge seal of the insulating glass panes." 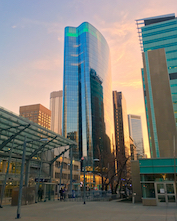 "The overall exterior visible quality and glass flatness was a huge concern. Therefore, the outer lite was specified as 2-by-8mm laminated glass to lower the risk of visual distortions – all intended to provide a higher level of flatness on the exterior surface," emphasized Schulte.

SOM's associate Eric Pasche, AIA, added, "Laminated glass was also preferred by the client to provide an additional level of safety in the event of glass breakage.

"The architectural team at SOM also was very concerned about color matching between flat, concave and convex shaped panels," noted Schulte. Anisotropy, which is the property of being directionally dependent, also was an important consideration.

Custom coatings met the architectural vision and aesthetic intention. Schulte elaborated, "Clarity developed a plan with G-Crystal and TNG to customize a low-e (coating) for the surface #5 vs. surface #4 to receive similar reflection and solar performance values throughout the glass."

Pasche clarified, "This strategy was only used at the concave units. Most of the tower has the low-E coating on the #4 surface. The surface stresses for concave curved glass would cause the typical low-e coating on surface #4 to stretch and break, so a custom coating was developed for surface #5 on the concave units to create the same visual effect as the typical units."

Schulte continued, "This let the building envelope look shiny from a distance, but more transparent and neutral up close. From a spacer perspective, the color was specified in black to have the spacer virtually disappear into the window system without any perimeter reflection."

TNG produced the units, working closely with Clarity's inspection process and team. "The owner required a 100 percent inspection of fabricated glass, which TNG accepted and welcomed to prove the high level of production quality and workmanship on the final glass. Clarity managed to keep all the loose ends together to develop, produce, inspect and deliver a tailor-made product from China at the highest aesthetic and quality standards," said Schulte.

"The ease of handling Technoform spacers for flat and curved glass units streamlined the production process to an efficient output of units per day in order to meet the high expectations of the client on quality, schedule and delivery time," he praised. "Clarity handled all of the local logistics – from China to Windsor – which included between 85-100 containers on the tower portion of the project." Additional shipments were added for the podium and glass roof portion of the building.

Anticipating the needs of Contract Glaziers West, TNG and Clarity delivered the glass prior to installation. Schulte shared that EllisDon had expressed excitement for how the supply chain was "seamlessly executed on the delivery timing and level of quality." The project was completed on time in for a grand opening in April 2017. Total construction costs are estimated at $200 million.

"Overall this was a challenging, yet highly successful project, with a unique vision that all team members collaborated well on in bringing it to fruition," concluded LeBlanc.