September not seasonally adjusted (NSA) construction unemployment rates improved in 32 states and the nation on a year-over-year basis, according to analysis released by Associated Builders and Contractors (ABC). The national NSA construction unemployment rate of 5.2 percent was 0.3 percent lower than a year ago, according to data from the Bureau of Labor Statistics (BLS).

This was the lowest September construction unemployment rate since 2000, when it was 4.6 percent. BLS data also reported that the industry employed 208,000 more people than in September 2015.

“September 2016 marks the sixth year of uninterrupted monthly year-over-year rate decreases in the national construction unemployment rate that began in October 2010,” said Bernard M. Markstein, Ph.D., president and chief economist of Markstein Advisors, who conducted the analysis for ABC. “These industry-specific unemployment rates are not seasonally adjusted, so it is important to note states’ performance on a year-ago basis. The year-over-year improvement in the national unemployment rate as well as in the rates of 32 states demonstrates the steady improvement in the construction job market over the past year.”

Like August, the historical pattern for change in the national NSA construction unemployment rate from the month before is ambiguous. Starting in 2000, when the BLS data for this series begins, through 2015, the change in the September rate from August has fallen eight times, risen seven times and been unchanged once. This year’s September increase of 0.1 percent adds an eighth year that the rate has risen from August.

The Top Five States
The states with the lowest estimated NSA construction unemployment rates in order from lowest rate to highest they were:

Wyoming dropped from the top five in August and experienced the largest monthly and year-over-year jump in its NSA construction unemployment rate—up 2.7 percent and 1.7 percent, respectively—to 5.3 percent.

Meanwhile, Vermont fell from tied with Idaho for fifth lowest in August to tied with Michigan for 13th lowest in September with a 4.3 percent rate. Vermont also had the fourth largest monthly increase, up 1.1 percent from August.

The Bottom Five States
The states with the highest NSA construction unemployment rates in order from lowest to highest rates were:

All of these states were also among the five states with the highest construction unemployment rates in August.

To better understand the basis for calculating unemployment rates and what they measure, see the article Background on State Construction Unemployment Rates. 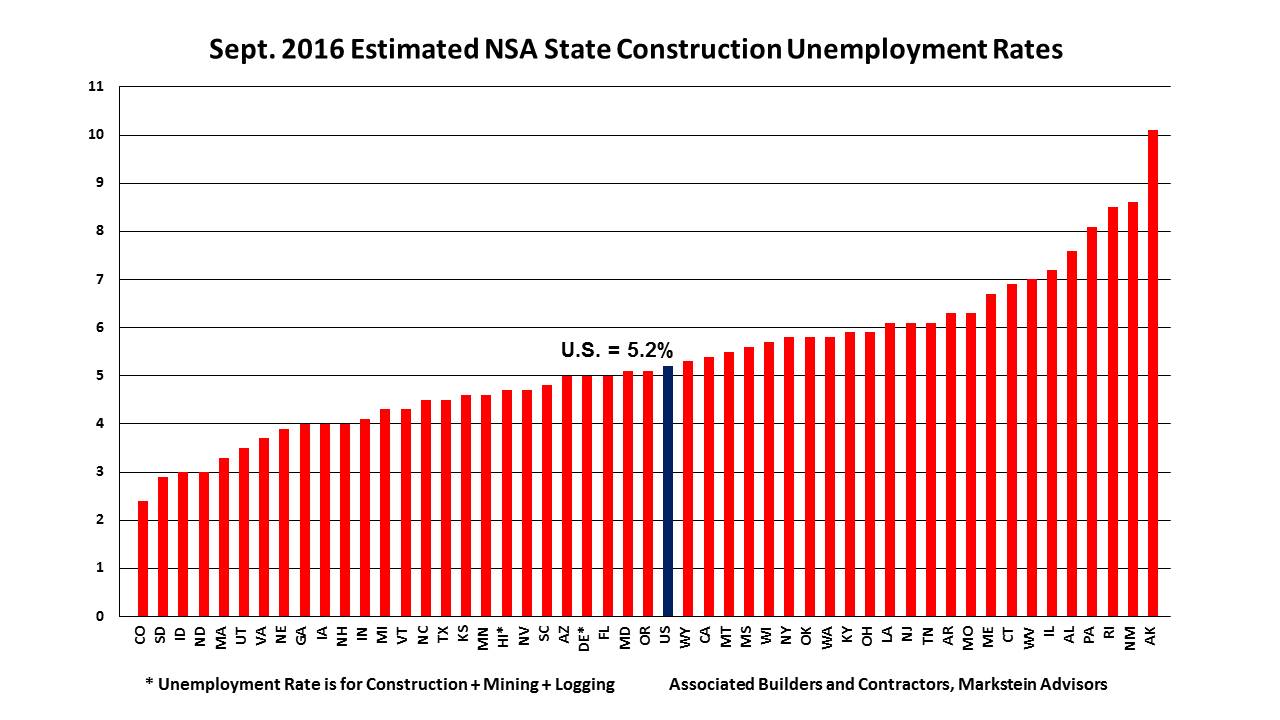 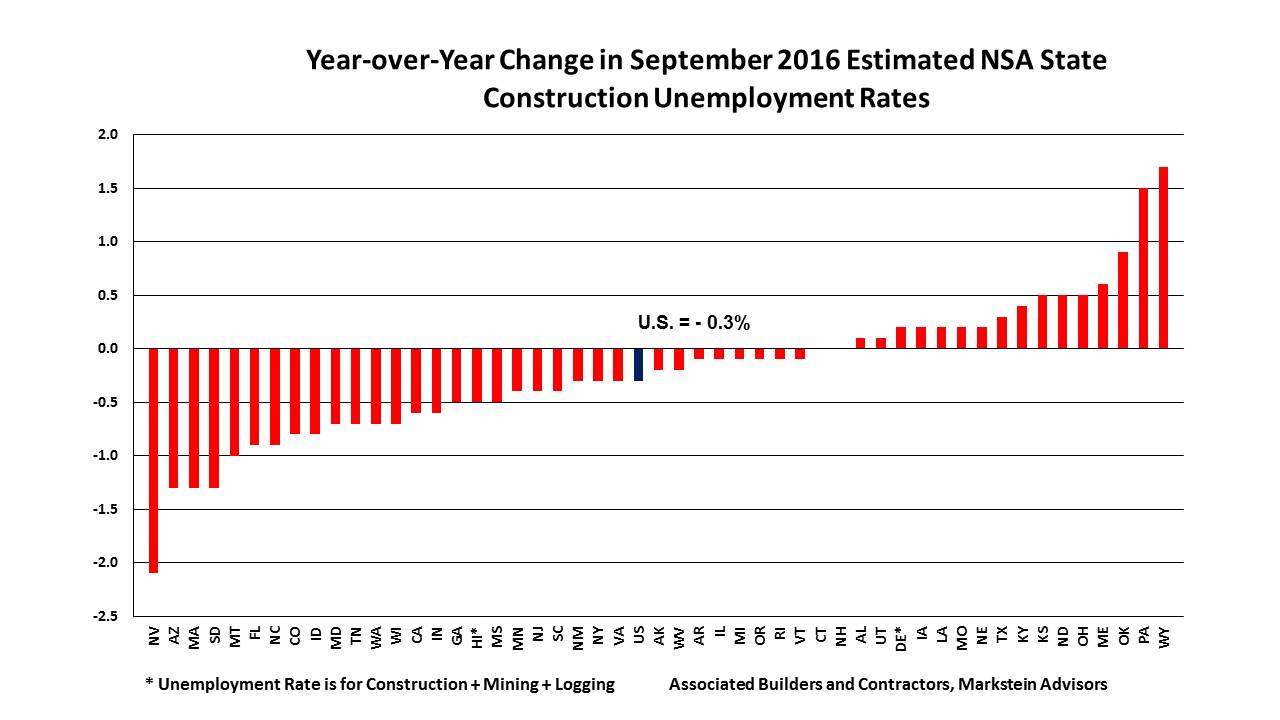 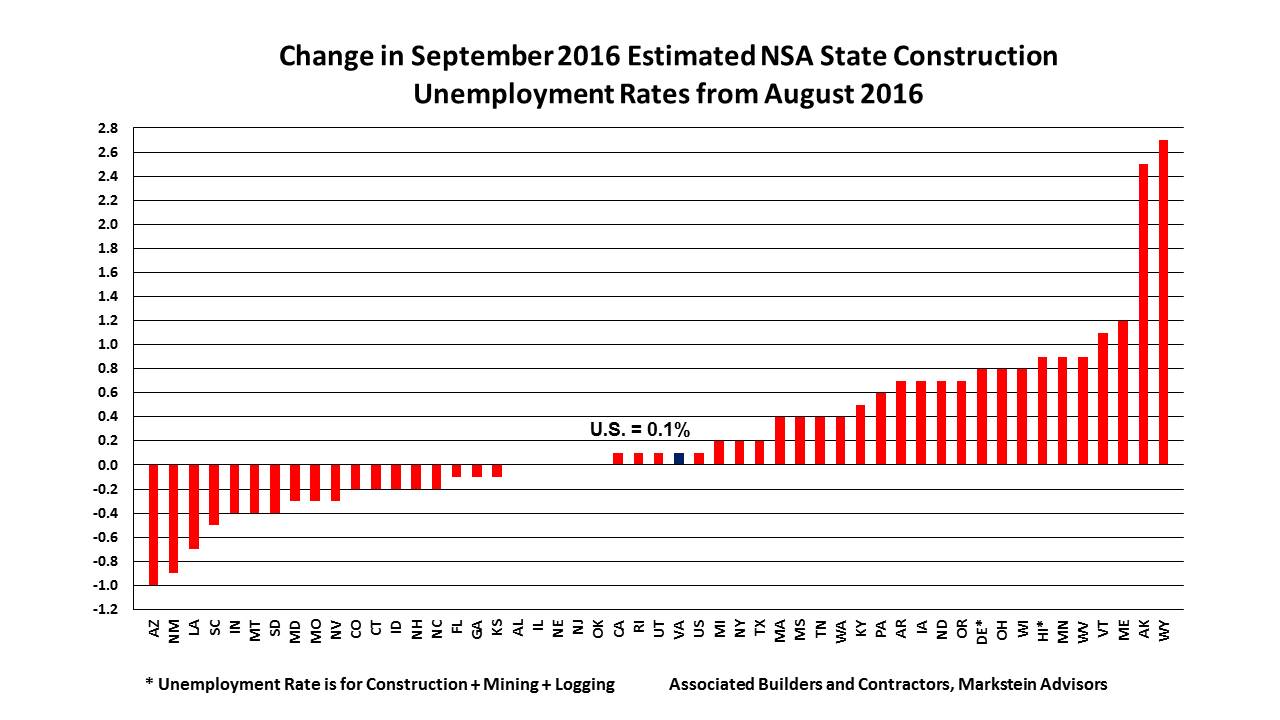 Content Is King: If Unemployment Is so High, How Come We Have a Worker Shortage?