This website requires certain cookies to work and uses other cookies to help you have the best experience. By visiting this website, certain cookies have already been set, which you may delete and block. By closing this message or continuing to use our site, you agree to the use of cookies. Visit our updated privacy and cookie policy to learn more.
Home » Blogs » The BE Blog » Wall Assembly Including Fiber Glass Insulation Proves Peak Performer in New Study
Insulation

A new study from Re:Vision Architects draws attention to a common flaw in research of products for the build environment: materials research and product selection typically focus on single-product performance, when very few building assemblies are composed of single products, but rather a combination of products. This simplistic approach led researchers Christopher Lee and Nicole Campion to look instead at the performance of wall assemblies, versus single products.  Their study considered five wall assemblies and the results showed that and double stud wall using fiber glass insulation was among the top performing assemblies.

The wall assemblies considered interior and exterior components with each of the metrics above weighted equally. 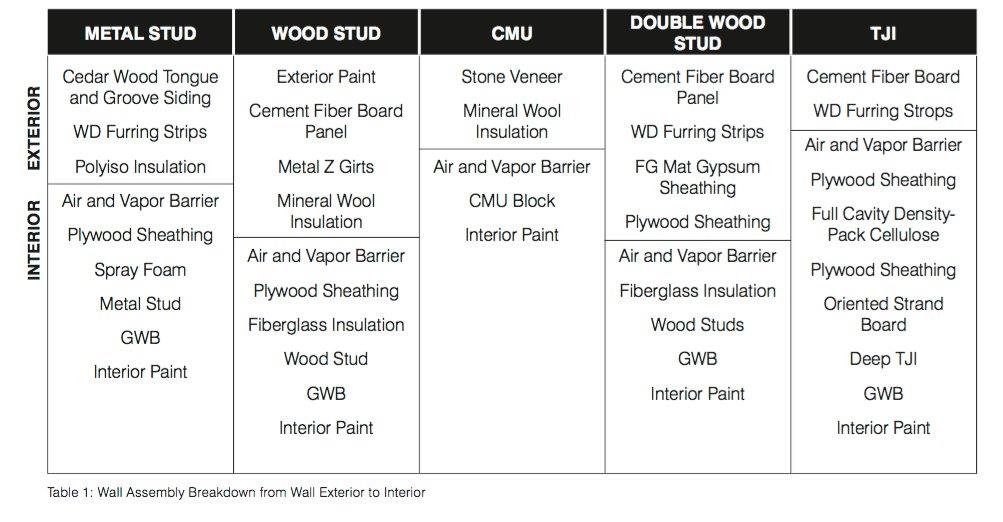 Another top performer in the study was a truss I joist. Both the double-stud wall and the truss I joist scored high in thermal performance and low in embodied carbon. A single-stud wood assembly closely followed, only a few points behind in the toxicity category. A concrete masonry unit and a metal stud assembly were the lowest performers, scoring “poor” in thermal performance and embodied carbon footprint, respectively. The study also showed that the metal assembly with spray foam had embodied carbon six times more than double stud wood assembly with fiberglass insulation.

In a separate analysis, the researchers focused on one variable – insulation choice – for three assemblies and found: Cellulose and fiberglass were low in carbon and toxicity but cellulose is costly.

Based on these results, researchers concluded that installing XPS and mineral wool on the exterior of a building, with fiberglass or cellulose in the cavity scored highest among all wall assemblies.

For more on this and other great blog posts, visit The Insulation Institute's website.

We appreciate you validating our previous statements to...

What could interfere with Artemis 1 to a...

Climate projections are models of Earth's climate in...