The Difference Between Reflectance and Emittance

Among the three basic forms of heat transfer - conduction, convection, and radiation - the term emittance refers to a material's ability to release heat through radiation.

Emittance is the ratio of the radiation emitted by a given material to that emitted by a "black body" at the same temperature. This unitless value would be 0.0 if no emittance was possible and 1.0 at the ideal maximum - the theoretical "black body" (i.e., a material with an emittance of unity).

The lower the emittance, the lower the radiative heat exchange. Typically, emittance is related to absorptance (i.e., highly absorptive materials will usually have high emittance) - but they are not the same characteristic. With regard to opaque materials, absorptance directly relates to reflectance.

What is reflectance? How is it different than albedo?

Recall that solar radiation striking a surface will either be reflected, absorbed, or transmitted. The combination of those three phenomena will equal 100% (irregardless of emittance). When referring to opaque materials, solar radiation will not transmit. It will only be absorbed or reflected.

Reflectance is the ratio of reflected light to incident light.

An example of almost perfect reflection from an opaque surface would be a well-silvered mirror. Conversely, a matte-finish black painted object would prompt almost perfect absorption. With any given surface, color will play a role. Lighter-colored surfaces will have a greater LRV. Keep in mind that the angle of light incidence will impact reflectance.

Solar radiation exhibits a range of wavelengths within the electromagnetic spectrum - from ultraviolet (UV), to visible light, to infrared (IR). The infrared radiation coming from the Sun has a very short wavelength. It is not heat. Solar radiation of any wavelength does not become heat (i.e., thermal energy) until it strikes something on the Earth (or in its atmosphere) and becomes terrestrial long-wave IR radiation.

Anytime heat is radiated from a material's surface, it is long-wave IR radiation, not short-wave IR (like what comes from the Sun).

How does reflectance and emittance work in tandem on "cool roofs"?

With cool roofs, color is typically the first design consideration. However, emittance also matters because the higher the emittance, the more readily the roof surface will radiate long-wave IR (heat) to the sky.

Mindful that reflectance and albedo can be different, a combination of high albedo and high emittance resists solar heat gain most effectively. They can also reduce the urban heat island effect. The concept of solar reflectance index (SRI) emerged to facilitate convenient comparisons among various roofing solutions.

How does the SRI work? 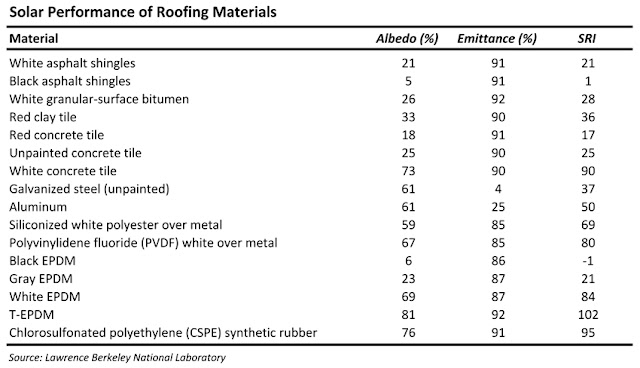 How is the SRI calculated?

For a given material, obtain its solar reflectance (albedo) and thermal emittance ratios via the Cool Roof Rating Council standard CRRC-1. SRI is calculated according to ASTM E 1980.

Teams should design with a three-year aged SRI value. The calculation of which is based on the aged tested values of solar reflectance and thermal emittance.