Ankrom Moisan Architects (AMA), an award-winning firm specializing in integrated architectural, interior design, urban design and branding services, has moved into its new founding office at 38 Davis in Portland's Old Town Chinatown District. Encompassing 58,000 square-feet and three floors of the six-story 38 Davis, AMA is the largest tenant of the district's first ground up new construction project in a decade. 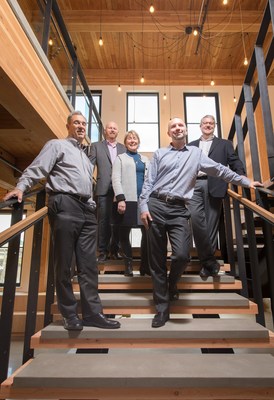 Ankrom Moisan had considered more than 25 different locations for its new Portland office before developer Gerding Edlen engaged AMA in 38 Davis as a tenant, and subsequently, as project architect. The firm seized the opportunity to build its dream creative workplace in the mixed-use building, which will also house University of Oregon (UO) classrooms and retail space on the ground floor, UO administrative space on the second floor, and a mix of affordable and market rate housing on the top two floors.

"Our new workplace at 38 Davis resulted from our pursuit of a space that directly reflects our mission, values, culture and identity," said Murray Jenkins, executive vice president at AMA. "In every Ankrom Moisan project we strive to create places where people and communities thrive, and we are extremely proud to have accomplished this on our own behalf at 38 Davis."

"In 38 Davis we embraced the opportunity to 'walk our talk' and create for ourselves the type of environment that we consistently aspire to create for our clients," said Bowery. "Design can change people's lives, now and for future generations, and we consider the most prominent elements of our design approach to be inclusion and partnership. The result of our design process at 38 Davis is that every aspect of the new AMA workplace looks creative, feels creative, functions creatively and inspires creativity. We are really excited to see how our new creative workplace will impact the energy, vibrancy and future of our firm."

In keeping with the tenor of the Old Town Chinatown District, the AMA workplace – along with all of 38 Davis – capitalizes on a historic method of construction design, combined with modern day building codes and design sensibilities. Wood, glass, steel and concrete are used prominently throughout. Timber construction framing and exposed glue-laminated timber beams dominate the space, and concrete floors provide a modern, urban aesthetic.

Functional materials like brick and metal are integrated into the facade of 38 Davis, and historic cast iron columns from some of Portland's past and present buildings will form a freestanding gateway to 38 Davis and the entire Old Town Chinatown District. Ankrom Moisan also created a pedestrian walkway and public space alongside the building adjoining its neighbor, the Oregon College of Oriental Medicine – this promenade is intended to encourage interaction between tenants and visitors of the two buildings.

"It was important that 38 Davis convey a distinctive brand reflecting a sense of place, specifically the Old Town Chinatown District," noted Jenkins. "At every turn we strived to honor the community's history while reflecting the look and feel of other buildings in the area."

Embracing both location and the mixed-use nature of 38 Davis, the AMA branding and identity team worked with the architecture and interiors team to create a cohesive experience from the outside in and inside out. The key branding elements of the building are inspired by the Willamette River along with ancient Chinese calligraphy and brush painting, a nod to the neighborhood. These elements helped inspire the logo for 38 Davis, and the large abstracted river wall in the lobby, which is the largest scale shared lobby in Portland.

Consistent with AMA's passion for sustainability and making the world a better place, 38 Davis is on track to become the first LEED New Construction v4 building in the City of Portland. The building is topped by a green roof, and features gray water reclamation throughout. Within the AMA space, large fans operate in tandem with operable windows to circulate air, and a custom software program suggests appropriate times for opening windows rather than solely relying on the HVAC system.

Ankrom Moisan's move into its new headquarters culminates a busy year for the firm, which included relocating the Seattle office in February, opening a new office in San Francisco in August, and its September launch of The Society, an independent hospitality design collective.