The Right Wall Assembly is a Key Component to Acoustic Performance

Of all the five senses, it could be argued that our sense of hearing is one of the most sensitive. Sounds attract our attention and disturb our concentration, which is why control of ambient sound is so important in interior spaces of all kinds. Most people need a reasonable degree of quiet to concentrate, relax or feel comfortable. This is why acoustics is often seen as a vital part of the equation when talking about the indoor environmental quality (IEQ) of an interior space.

In the past several years, there has been greater recognition of the important role sound plays in creating occupant comfort in homes, schools, workplaces and healthcare facilities. As a result, there has been an increased emphasis on sound management and acoustic control. This is in part driven by the fact that poor sound control is one of the top five sources of lawsuits in residential construction. It is a major concern for condo associations and in multifamily applications, in particular. 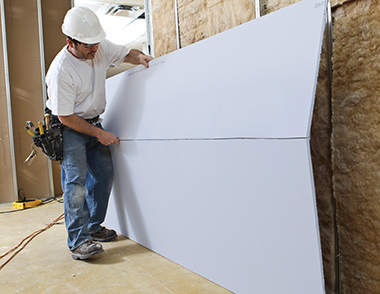 Most everyone has either been in an apartment or stayed in a hotel where the walls are so thin that you can hear everything that is going on next door. It is distracting, uncomfortable, and also violates most peoples’ basic sense of privacy. In one’s home, a person has a reasonable expectation that their conversations won’t be overheard by someone sitting on the other side of the wall.

But what can be done to prevent sound from spreading from one space to another? No one wants to live in a concrete bunker. Fortunately, there are ways to manage sound while staying within the comfortable realm of gypsum wall systems.

To understand how to manage sound, it is important first to understand the basics of how sound spreads. In any acoustic situation, there is a source, a path and a receiver. The source is what is making the sound, the receiver is the person hearing it, and the path is how it gets from one to the other. The key in good acoustic design is to interrupt that path and thereby minimize or eliminate the sound before it gets to the receiver.

Sound travels as vibrations, which means it can make its way through solid materials just as it does through the air. Some materials are good conductors for sound, and others are poor conductors, so in acoustic control, the goal is to employ poor sound conductors in wall, ceiling and floor assemblies. Good acoustic design employs sufficient mass and/or advanced product technology to dampen sound energy as it passes through.

Products and assemblies that are designed to limit the transmission of sound often carry an STC rating. STC stands for sound transmission class, and it measures the acoustic quality of a product or assembly. The higher the STC rating, the greater the sound interruption provided by that component.

The wall assembly plays a major role in any sound management strategy. Today, there are two basic schools of thought for dealing with most wall assembly acoustic design. One approach is to add an additional layer of gypsum board along with a resilient channel or some kind of acoustic clip. This type of assembly with that additional layer of gypsum can help to limit sound transmission.

Another method is to install factory-laminated noise reducing gypsum board. This relatively new technology takes the place of the more complex resilient channel system discussed previously. It is designed to dampen sound energy at a much higher level than standard gypsum board, but can function and install within the parameters of a standard wall assembly.

An example of a factory-laminated noise reducing gypsum board is SilentFX QuickCut from CertainTeed Gypsum. It is engineered using the mass of two dense gypsum board layers sandwiching an inner layer of viscoelastic polymer. This polymer acts like a shock absorber to dampen the vibrations of sound energy as it passes through. This type of “Constrained Layer Damping” board product performs well acoustically over an extended range of frequencies, and results in increased STC ratings.

Because it looks, works and installs like standard gypsum board, a noise reducing board is often a much simpler solution than multi-component resilient channel. This type of solution also has advantages because it is less prone to short circuiting. Short circuiting can happen when screws or nails during gypsum board installation or even from picture hanging make contact with the wall stud framing. This provides sound vibrations a direct path to move through the wall, essentially circumventing the acoustic design of the assembly.

Sound, much like water, will always find the path of least resistance to find its way through any barrier. That means it is important to consider all seals or any gaps where sound might find a way. These gaps can create what are called flanking paths. A flanking path is an indirect route sound can follow from one space to another. That can be through things like air ducts and under doors, but in a wall assembly flanking paths often occur when two outlets are built in back to back, or two medicine cabinets are built back to back in the same wall cavity. This creates a space through the insulation or acoustic board and can negate the acoustic design of the entire wall.

Flanking paths can also occur between the wall assembly and the floor or ceiling. There may be floor joists perpendicular to the wall, and if there isn’t some kind of break, blocking or seal between the joists at the wall, the sound will go through the floor then through the joist cavity and up into the adjoining space. The 2015 National Building Code of Canada has incorporated Apparent Sound Transmission Class (ASTC) into the code to address flanking transmission of assemblies. So along with specifying the right components for acoustic control, it is important to consider potential flanking paths at the design phase.

For spaces that need a much higher level of acoustic control, there are more advanced (and costly) techniques available. For example, a wall can be built with a double row of studs, with an air space of about an inch between the rows of studs, with one or more gypsum board layers attached to both sides. This makes a thick wall where one side has no physical attachment to the other, so it is possible to achieve much greater performance. Systems like these are often used in chase walls, recording studios and other applications with very high requirements for sound control.

But for most cases, the more standard approaches can easily deliver the desired results at much more acceptable price point. There are acoustic solutions for most any budget, and when choosing between a resilient channel and an acoustic gypsum board, it is important to look at the whole cost/benefit equation. While an acoustic gypsum board product may carry a higher price point than standard gypsum board, it also requires less labor and fewer components than the resilient channel/acoustic clip approach. It is recommended to do a total installed cost and cost/benefit analysis to determine the right solution for a particular application.

Acoustics is not a new concept. It’s been around for a long time, but has found renewed emphasis in recent times. Part of this comes from the desire for privacy both personal and through regulatory standards such as the HIPAA Privacy Rule for healthcare facilities, and it is also driven by programs like the U.S. Green Building Council’s LEED green building certification program, the International Green Construction Code, or the ANSI S12.60 Classroom Acoustics Guidelines, recognizing that acoustics is part of a healthy indoor environment. Many forces combined have driven manufacturers and designers to come up with better sound control strategies. The good news is that now, for end users and occupants, there are many ways to achieve a peaceful, acoustically secure interior space.

Douglas C. Gehring, P.E. is the director of marketing technical services for CertainTeed Gypsum. He has an active role in innovation and new product/system development in the areas of gypsum, acoustical ceilings, roofing and insulation. Gehring is a member of the American Society of Mechanical Engineers and serves on four of its committees. He is also a member of the American Society of Heating, Refrigerating and Air-Conditioning Engineers; the National Fire Protection Association and The Construction Specifiers Institute. Gehring holds a B.S. in Mechanical Engineering from the University of South Florida, is a Professional Engineer in the state of Florida and is a certified LEED Green Associate. He can be contacted via email at Doug.Gehring@saint-gobain.com.