Designed by Perkins Eastman and developed by RXR Realty, The Willoughby is a striking 445-foot-tall, 34-story tower that combines residential units, new academic and office spaces, and a landscaped outdoor terrace featuring stunning views of New York City. The 450,000 sf mixed-use tower was celebrated in early June with a ribbon-cutting ceremony, marking its official grand opening.

Built in collaboration with Long Island University (LIU), The Willoughby is located at 196 Willoughby Street on LIU’s downtown Brooklyn campus. With Willoughby Street to the north, Ashland Place to the east, DeKalb Avenue to the south, and Flatbush Avenue Extension to the west, the building is as Brooklyn as it comes—and features vibrant floor-to-ceiling glass windows so you can’t forget. 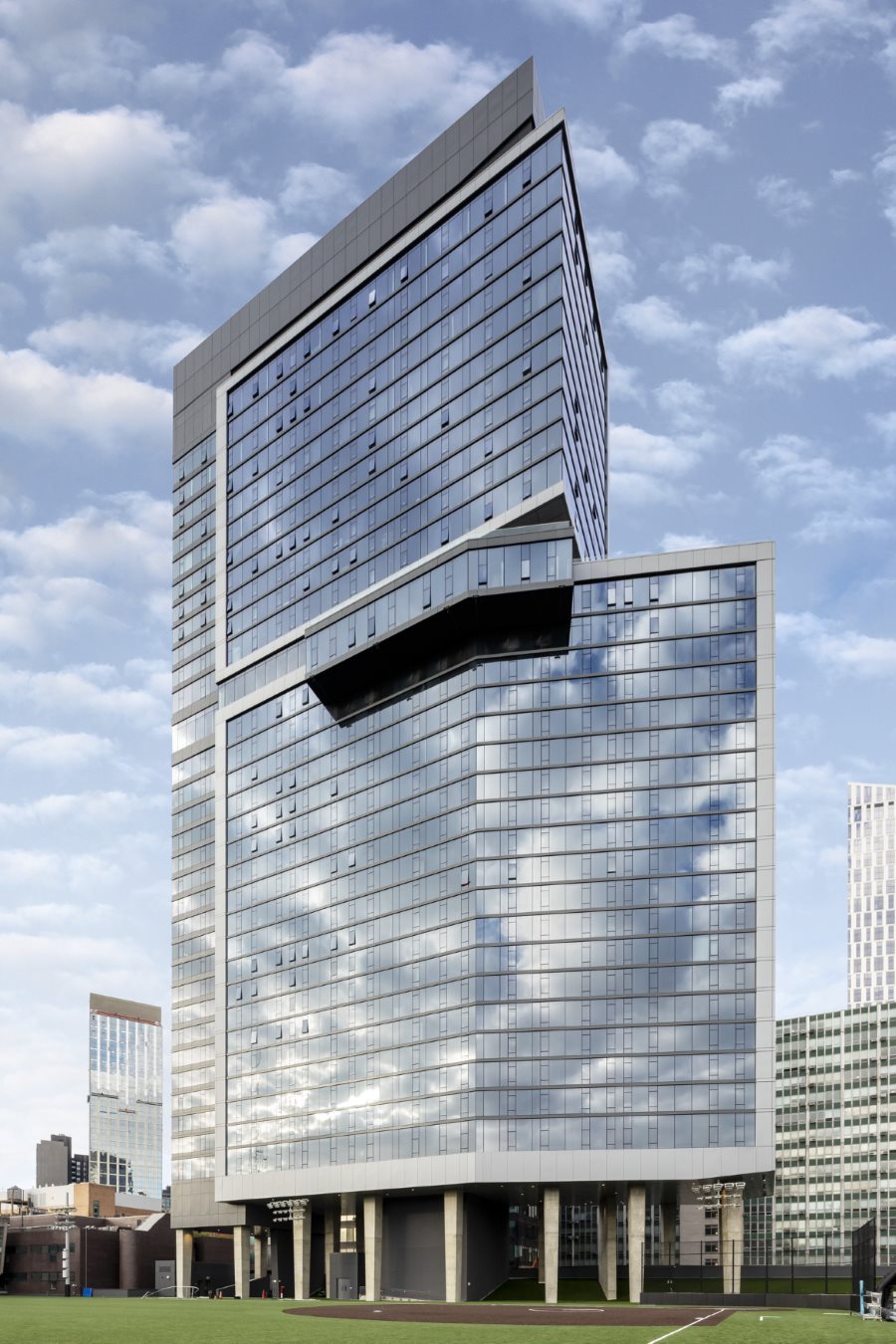 With a design that keeps the LIU community in mind, the tower is raised on a colonnade above a campus athletic field, thus allowing for playing areas and spectator areas to watch the LIU student-athletes kick soccer balls and hit softballs out of the park. The building features 476 residential units, 30 percent of which are dedicated as rent-stabilized apartments for middle-income households (available via a housing lottery).

The Willoughby offers everything from studios to two-bedrooms and is rich in amenities for the individuals who will call it home. Such luxuries include a fitness center, media room, library, business and lounge areas, and a spacious outdoor terrace located on the twenty-second floor that boasts fire pits, grilling stations, and comfy seats made for relaxing.

“The Willoughby was an exciting design effort,” says Perkins Eastman Principal Carl Ordemann, AIA, who led the project. “Taking a playing field on grade and rising it up thirty feet in the air with the LIU classrooms and a parking garage in the newly-created volume, then adding a high-rise market-rate residential project on long-legged columns above the playing field was no small feat. It came with challenges, of course, but complex issues with zoning were overcome, and working with RXR Realty was an interactive and fast-moving effort. The end result is a dynamic form with understated elegance.”

Blending the academic nature of the surrounding LIU campus, the charm of the Brooklyn neighborhoods that inspired it, and the comforts of modern-day luxury apartment living, The Willoughby is truly one of a kind. Now open for residents to enjoy, the mixed-use tower is the first phase of a long-term development plan created in collaboration with Long Island University.