The Unitarian Church of All Souls was built in a hurry.

Founded in 1819, this historic congregation has deep roots in the City of New York. But like many native New Yorkers, All Souls NYC has moved around quite a bit.

The current Colonial Revival church on Lexington Avenue, designed by Hobart Upjohn, was built in only six months between 1931 and 1932—and not a moment too soon. Its immediate predecessor was destroyed by fire in the fall of 1931. Before that, two previous All Souls locations had already been abandoned, over issues of structural integrity.

No busy community of faith likes to move, any more than householders do. But as All Souls NYC approached its bicentennial, their latest base seemed poised to pass into history as well. Their elegant building, long a fixture on New York’s Upper East Side, was in serious disrepair. And the challenges of renovation would be daunting.

This time, however, All Souls made a different choice. Rather than move yet again, the members would mount a mighty effort to save their cherished home.

Evidence of the building’s plight had grown difficult to ignore. The church’s traditional slate roof was leaking, with visible water damage inside the sanctuary. Decorative stone elements on the exterior—including parts of the steeple—were obviously cracked, and brickwork needed repointing. The distinctive neo-Georgian windows suffered from leaky frames, broken panes and jammed hand cranks. Overall, the building envelope was simply not keeping the sanctuary safe from the elements.

Pressures to modernize also loomed large. Most notably, the church lacked air conditioning, making summer use (including space rentals) almost impossible.  And no matter how desirable it might be, air conditioning was out of the question until one major fact could be addressed: All Souls was leaking energy. In addition to the outright breaches in the roof and walls, the large, arch-shaped windows were single-glazed, lagging far behind modern standards of energy conservation. Overall, a 2017 facility assessment by the firm of Kenneth O. Wiley concluded that All Souls was using 50 percent more gas and 200 percent more electricity than other buildings of its size and type.

In short, all roads led to the need for a major renovation. Luckily for All Souls, the congregation’s membership included several experienced architects, including Louis F. “Fritz” Reuter IV, who had served as Executive Director of the Capital Master Plan for the United Nations. Even better, Reuter and his fellow professionals, alarmed by the church’s condition, were willing to lend their expertise to supervising a rescue. By early 2019, All Souls had embarked upon a $12 million restoration plan.

As noted by lead architect Rolando Kraeher, “Priority number one was to make sure that we made the envelope of the building watertight and windtight.” The slate roof was fully replaced, and with scaffolding in place, a thorough inspection of the steeple and exterior repairs to mortar and stone could be carried out. The large windows were also completely replaced, frames and all.

With the building envelope now up to the job, the long-awaited air conditioning system could be installed. Here, respect for All Souls’ integrity as a notable example of Georgian Revival became a true challenge. However, space was found for mechanicals in the attic, and fortunately, the building included unused vertical air shafts that became the location for ductwork. In the sanctuary, the air diffusers are visible only as a thin, dark line around the edge of the church’s high ceiling.

With similar discretion, slimline speakers for a new sound system were placed on the rear side of structural pillars. Newly-relevant livestream capabilities were built in as well. Pew dividers were removed and access to the chancel (the front dais area) was improved, allowing freer movement during services and other events. At the same time, however, with the firm of Building Conservation Associates on board, great pains were taken to preserve the sanctuary’s original paint palette and other aspects of the original décor.


Seek and Ye Shall Find

No renovation is without surprises, and All Souls had its share. For example, while utterly essential to the future of the building, the creation of completely new windows proved even more challenging than expected.

As one of the earliest steps in the entire project, new window frames of structural aluminum were custom made for All Souls in The Netherlands-by the firm MHB. The plan of attack was to assemble the windows on site, fitting out the frames with separately ordered panes of glass.

To comply with the New York City energy code for renovated buildings (and the desires of the congregation), the new windows would need to be double-glazed, with proper thermal breaks between the interior and exterior layers. But to recreate the original effect of the windows as much as possible, the glass would still need to be “antique” in appearance, replicating the slight distortion (or “waviness”) that is typical of preindustrial glasswork.

It was thus a meaningful setback when the glass initially provided by a subcontractor proved disappointing. With the project clock ticking, all hands focused on finding the right glass for period style with modern efficiency. Finally, the hunt succeeded: All Souls was able to source authentic mouth-blown glass from the architectural glass company Bendheim.

Bendheim’s Lamberts Mouth-Blown Art Glass is hand made by the traditional cylinder method at an artisanal glassworks in Germany. In addition to providing the same subtle distortion as original antique materials, mouth-blown glass can be tinted in very small batches by the addition of metal oxides. “We knew what we were looking for, and luckily, someone connected us with Bendheim. Once they had supplied us with samples, we could see that their product was superior to everyone else’s in terms of quality, color, and impact,” explained Reuter.

For the All Souls project, four different tints were used in addition to clear panes—pale brown, pale pink, and two shades of off white—with two different levels of distortion. Rolando Kraeher personally visited Bendheim’s facilities in Wayne, N.J., to evaluate and select each pane with the help of Bendheim partner Steven Jayson.

On site at All Souls, the age-old art of glassblowing met the latest in modern building technology, as the tinted lites were incorporated into IGU’s by Tower Insulating Glass of North Bellmore, N.Y. Each of the 520 panes (totaling around 1700 square feet of glass) was placed precisely according to the specified pattern. Under the supervision of construction management firm E.M Howell, the glass was then united with the new aluminum frames. Installation was performed by Bronx-based Kilroy Architectural Windows.

With the color design executed on the inner layer and clear glass on the outer, the double-paned windows now meet industry and ANSI standards for water and air infiltration. Their role as the aesthetic anchor of the sanctuary will carry forward as well.

One worldwide crisis, the Great Depression, resulted in haste when All Souls was first built. Another, the outbreak of COVID-19, almost brought its renovation to a halt. When New York State announced a construction moratorium in March 2020, All Souls’ new roof was only half-installed. The work was swiftly completed only a few months later, but one vital element remained lacking: the return of the congregation. In the face of the ongoing pandemic, All Souls would not see a return to full public worship until the spring of 2022.

No organization, faith-based or otherwise, remains part of history without perseverance. The determination of All Souls’ members, past and present, provides an apt case in point. As light spills into a sanctuary restored, the outcome of their commitment is plain to see: a bright future for All Souls combining the best of old and new.

Project at a Glance

What and where: The Unitarian Church of All Souls in New York, N.Y.

Project details: The church raised more than $15 million for an extensive renovation project for a sanctuary in serious disrepair. Major issues included a crack in the steeple, leaks in the slate roof and periodic failures of an outdated sewage pump system.

Window replacement: Replacement of the large sanctuary windows was needed to make the building weathertight and energy efficient.  To maintain the building’s Colonial aesthetic, the renovation team selected mouth-blown glass from Bendheim.

Hand-made in Germany: Each pane of glass was hand-made in Germany by the glassblowers at the Glashütte Lamberts. Studio Kraeher Architects specified a subtle tint for some of the panes in one of five different shades. Light entering the sanctuary is gently diffused, with the slightest hint of color.

Did you know? The congregation dates back to 1819. The sanctuary in which the renovation occurred was built in 1932, and is frequently rented out for weddings. All Souls NYC can accommodate up to 750 people in its sanctuary. 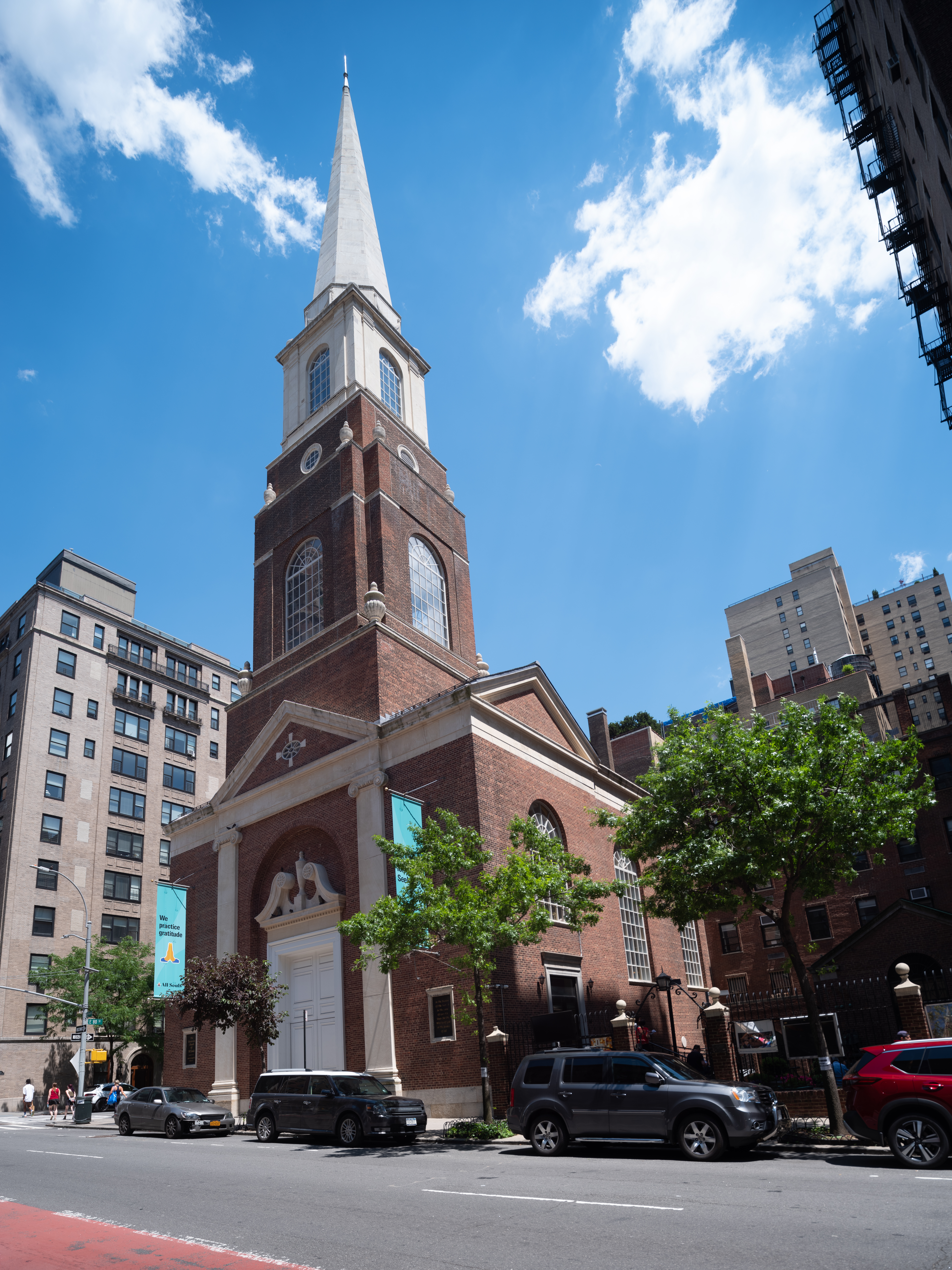