Historic preservation projects are tricky. Holding history in one hand and the future in the other, Central Roofing Company has carefully replaced the roofing on many notable projects during the company’s 90-year history. One specific project, the Masonic Temple in downtown Minneapolis, required intricate work to recreate the roof on an 1888 structure using modern materials. 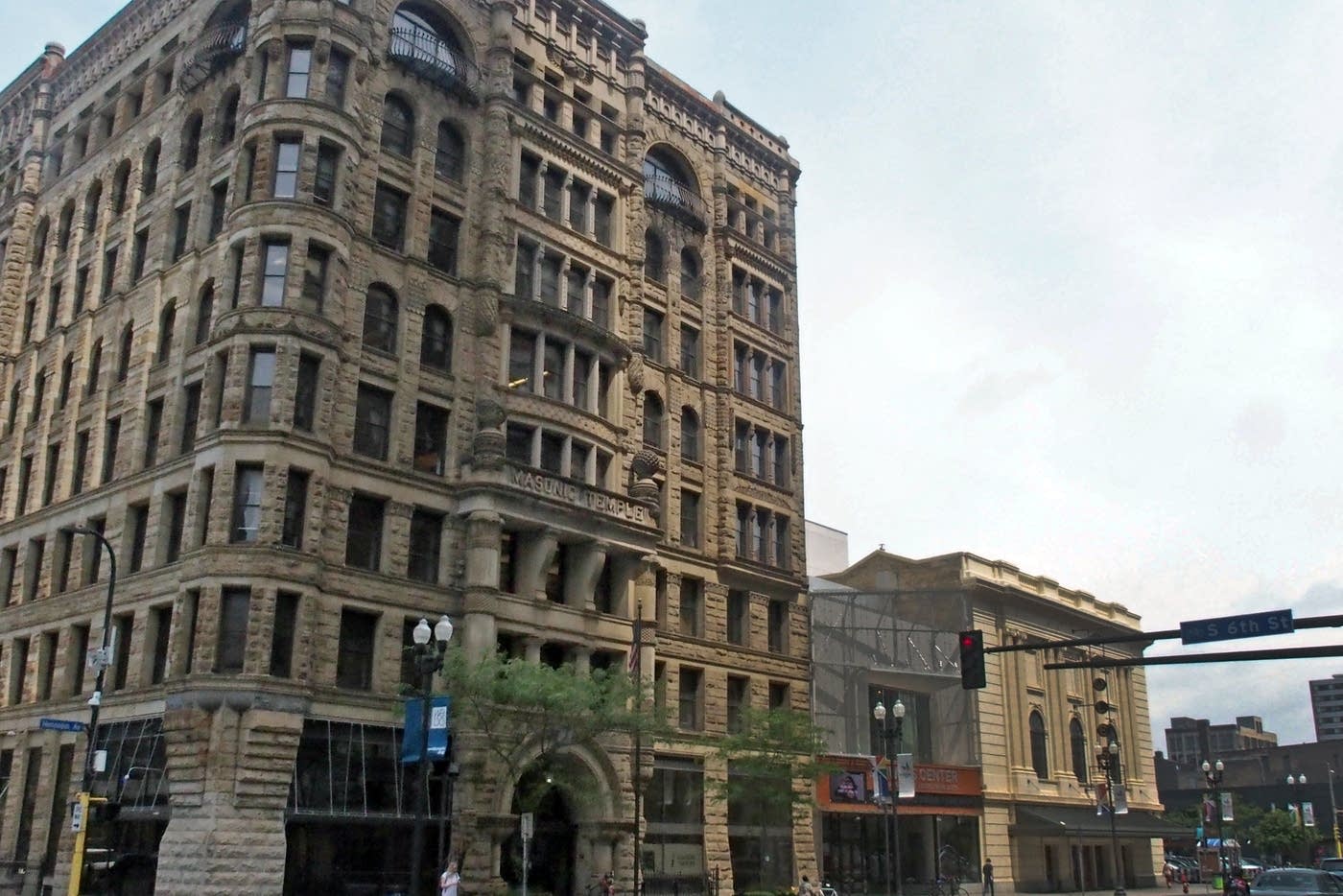 “We had to dig deep to even start the roofing work on this former location for the Hennepin Center for the Arts,” says Jesse Wilcox, project manager with Central Roofing Company in Minneapolis. “There was asbestos that had to be safely removed and two layers of old roofing.”

To begin the project, the Central Roofing team had to find a way to attach lifeline stanchions and tie-off points for worker safety. These were also needed for cleaning davit arms. The workers cut through an ancient clay tile roof deck to tie into the scissor truss system below.

“As we carefully started the project, we discovered that the original sloped roof was standing seam,” says Wilcox. “Flat areas had a flat seam metal product.  Over the years someone added a built up roof over the flat roof. And, it appears that a spray foam contractor buried the entire building in a horrible product. Our challenge was to find a way to safely remove all those layers.”

The challenges didn’t end there. The re-roofing project took place in the middle of the winter, on an eight-story tall structure that sits at a busy intersection. The team also had to repair ancient sheet metal facades.

Extreme care had to be taken with not just the roof surface, but the entire structure of the Masonic Temple. Built in 1888, the building was designed by Long and Kees, a noted local firm responsible for a wide variety of Minneapolis buildings, all of which are now listed on the National Register of Historic Places. 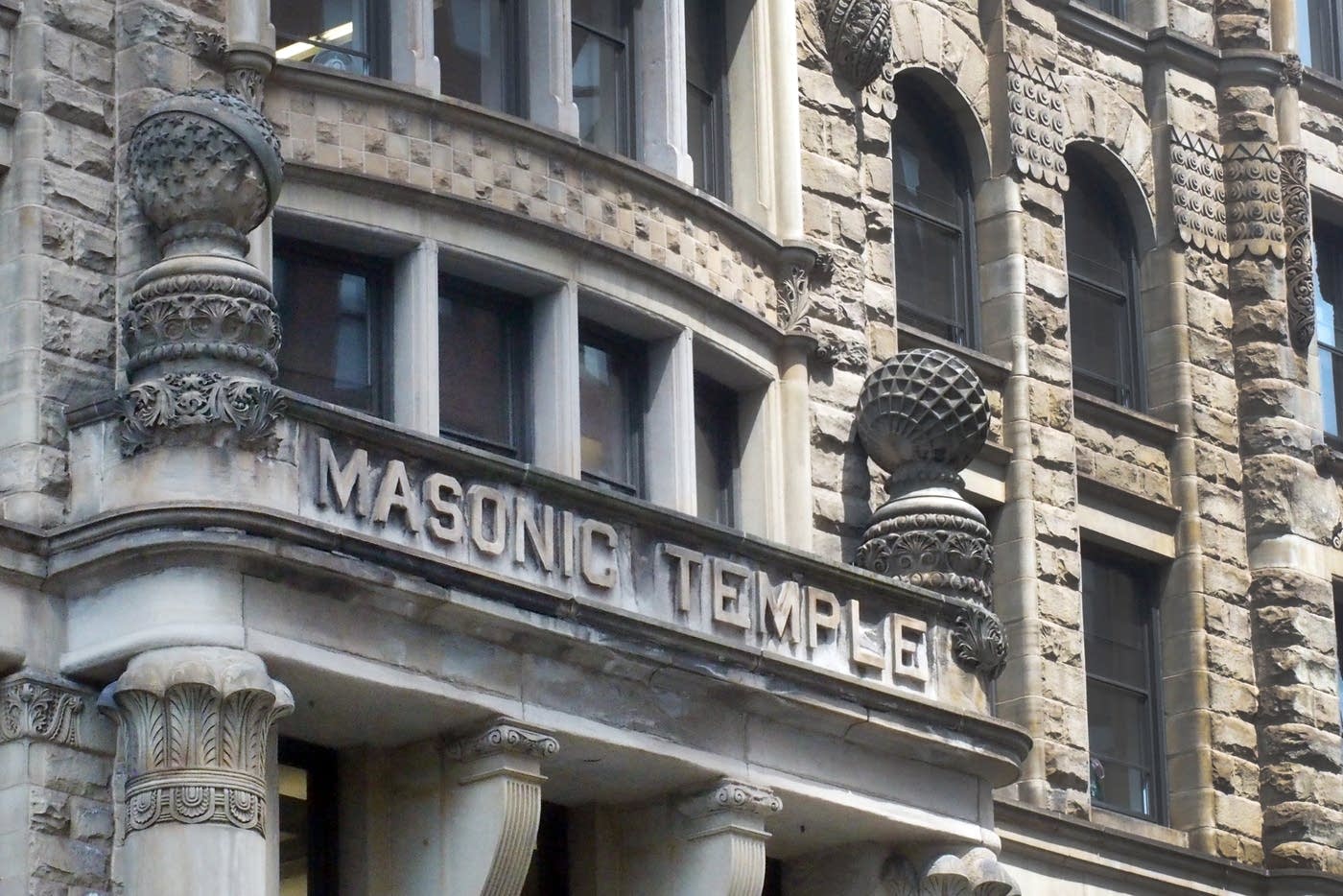 The ornate design of the Masonic Temple represents the Richardsonian Romanesque style of architecture. Many churches, civic buildings and mansions in Minneapolis were designed by architect Henry Hobson Richardson. Noted for their dramatic semi-circular arches, deeply recessed windows, and ornate exteriors, the structures are part of the history of Minneapolis.

In 2019, when the Masonic Temple was just over 130 years old, Artspace, a non-profit developer of artist facilities, brought in Miller Dunwiddie to help restore the building. The architectural and design team recommended Central Roofing Company to tackle the roof replacement.

“We’ve previously worked with Central Roofing on difficult projects downtown and on projects with historic integrity,” says Denita D. Lemmon, AIA, NCARB, LEED AP and principal of Miller Dunwiddie. “This was a complicated re-roof job. We knew the dedicated experts at Central Roofing would understand the care needed to successfully execute the project.” 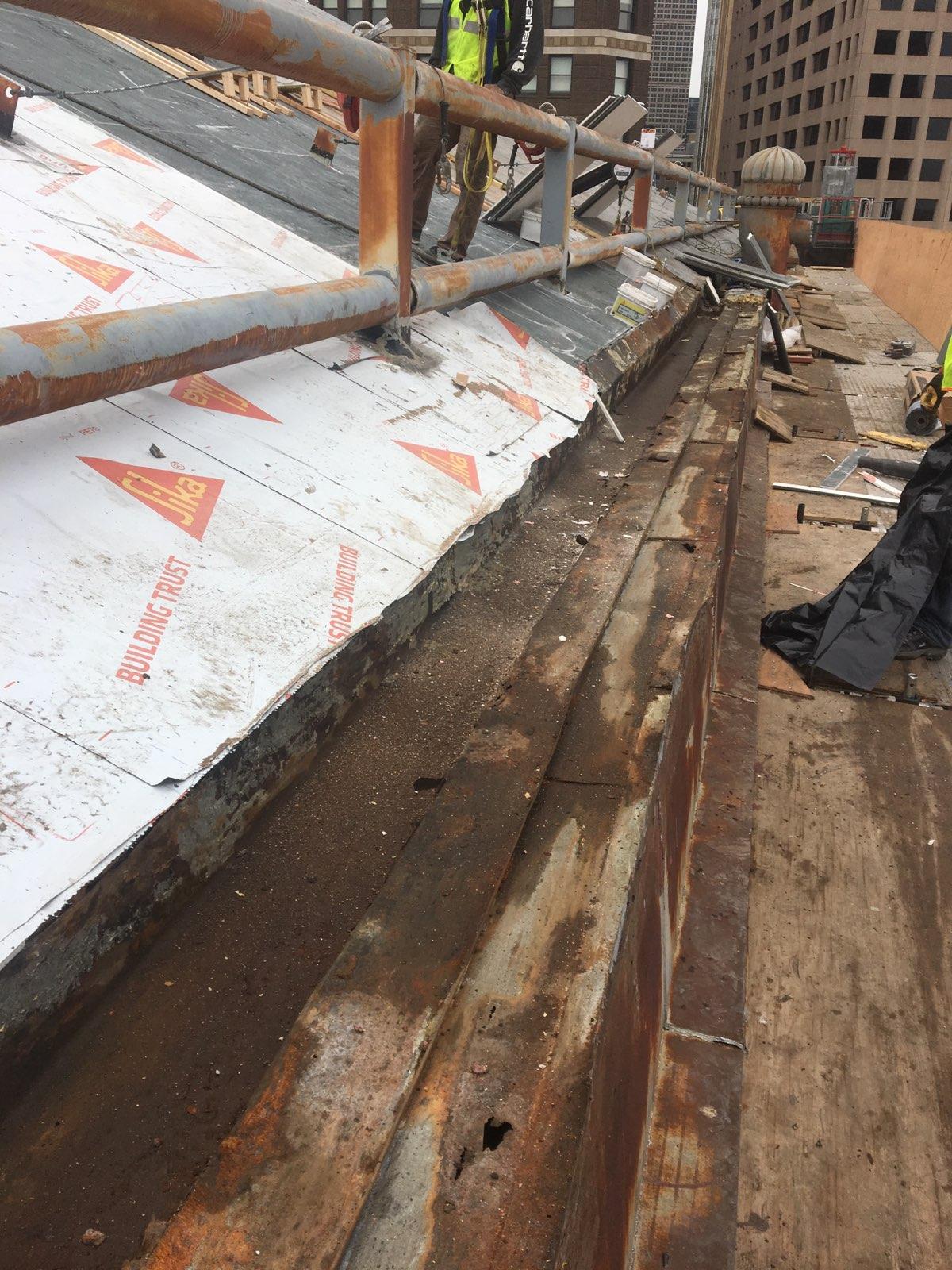 According to Lemmon, the unknown layers of the roof initially made the roof a mystery. “There were many layers applied over the years to try to extend the longevity of the roof,” says Lemmon. “That left a number of unknowns and many concealed conditions.

“We wanted a team to work with us in getting to the final outcome. With the Central Roofing team we got expert support and open communication throughout the entire process.”

Out With the Old

Once the project started, a hydro lift was attached to the 110-foot-tall structure. It operated continually to remove old roofing and bring up the new materials.

“When we tore off the roof we found layers of decaying products,” says Wilcox. “There was rotting architectural sheet metal and asbestos remediation that needed to occur.”

In With the New

After the abatement contractor was finished removing the asbestos, and all the old materials were gone, Central Roofing started work on the new roof. They selected a high-quality, fully-adhered PVC roofing product, Sika® Sarnafil® G 410, for the entire roof. With the benefit of being able to install in very cold temperatures, the product was the right choice for the historic building. 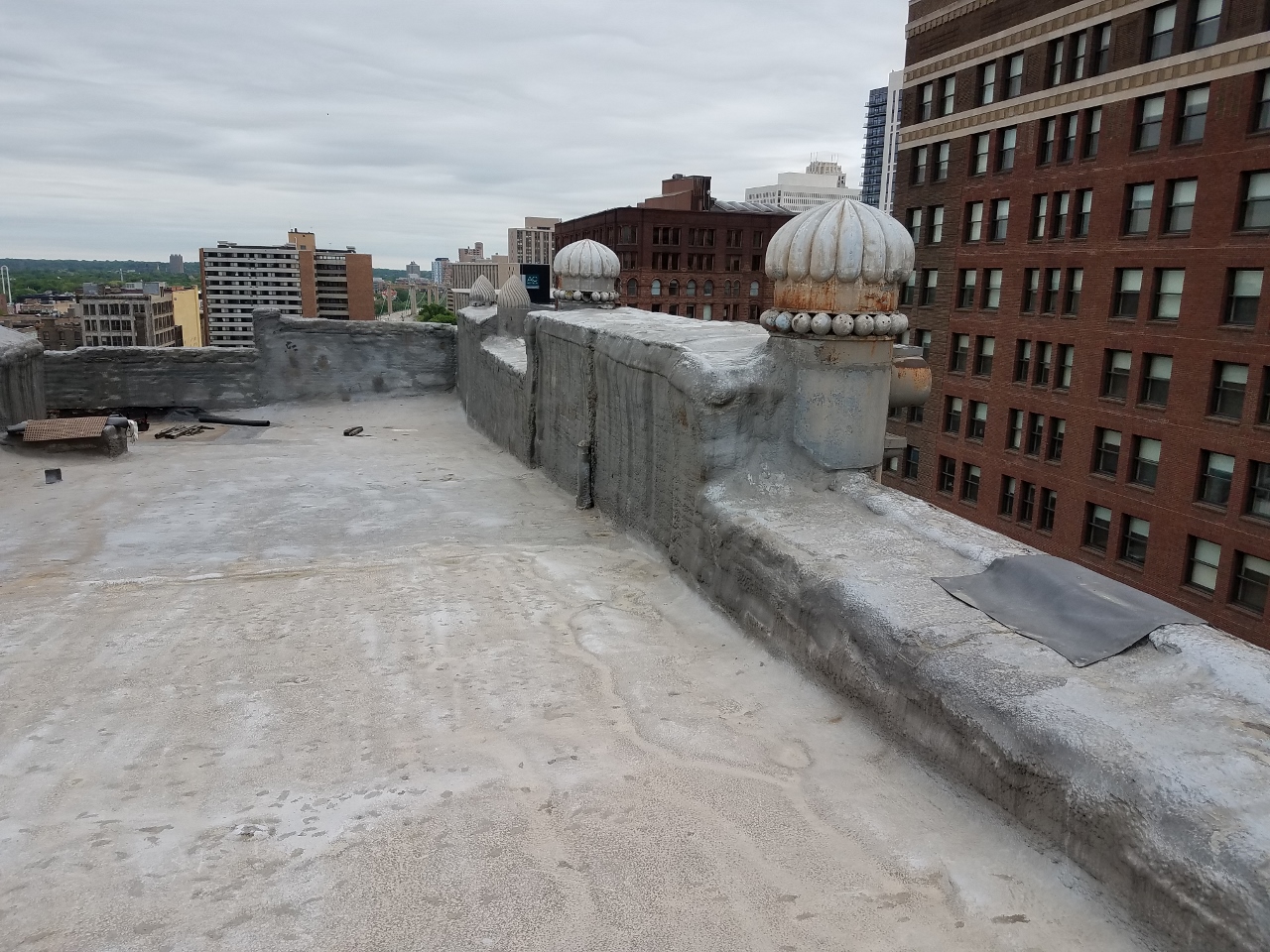 “There were ball details and a fascia with deep reveals,” says Lemmon. “Central Roofing was able to find metal balls to replicate and replace this deteriorated detail of the roof. The fascia was replicated using color and cutouts to provide an illusion of the original depth of the pieces. It allowed detail to remain at the fascia without the complication and cost of replicating the deep articulation of the original metal elements.

“This was a difficult site and a complicated reroofing project. The Central Roofing team was 100 percent committed to finding solutions and recreating an authentic-looking roof.”

Moving into the Future

Fully restored, the Masonic Temple continues to be a historical highpoint in downtown Minneapolis. The facility offers office, studio, rehearsal and performance space to many Twin Cities arts organizations. Its connection to the Cowles Center for Dance & the Performing Arts assures it of a place in the community for many years to come. 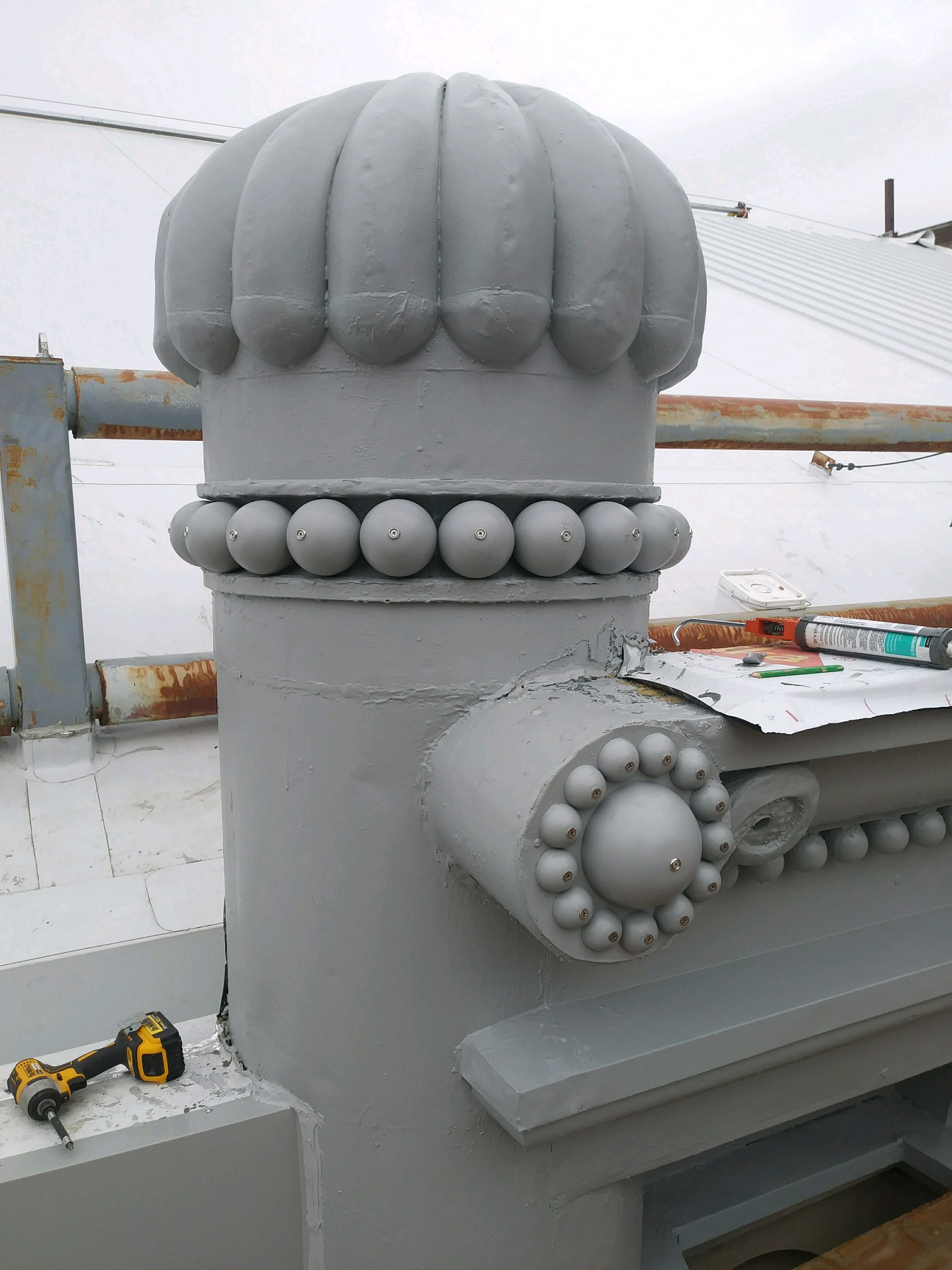 “We view it as a privilege to restore and preserve landmarks in our state,” says Wilcox. “Over the years we’ve honed our skills in working on historic projects. Carefully recreating or replacing a roof on a significant historic site can assure it lasts for decades into the future.”

On the Shore: Historic Hotel at Famous Lakeside Theme Park Gets New Roof