Construction industry employment expanded by 16,000 jobs on net in August, according to an Associated Builders and Contractors analysis of data released today by the U.S. Bureau of Labor Statistics. Over the last four months, the industry added 658,000 jobs, recovering approximately 61% of the jobs lost during March and April.

The construction unemployment rate, which reached 16.6% in April, stood at 7.6% in August, up 4 percentage points from the same time last year and down 1.3 percentage points from July. Unemployment across all industries declined substantially from 10.2% in July to 8.4% in August. This occurred despite an increase in the nation’s labor force participation rate, which rose from 61.4% in July to 61.7% last month.

“In July, the pace of job creation slowed compared to May and June, in part due to a slowing of economic reopening as COVID-19 became more pervasive in the South and more recently in the Midwest,” said ABC Chief Economist Anirban Basu. “Accordingly, there were projections that the August jobs report could massively disappoint.”

“But rather, today’s report indicates that America’s nascent economic recovery remains fully in place,” said Basu. “The big news was that the nation’s rate of unemployment declined to 8.4%, even as more people reentered the job market, which was due in part to a cessation of a sizable federal supplement to state unemployment insurance benefits.

“Despite the ongoing economic momentum, nonresidential contractors should brace for a challenging year,” said Basu. “While the overall economy and the construction industry added jobs in August, nonresidential employment shrank due to tighter financing conditions, diminished cashflow among property owners, lingering uncertainty, elevated commercial vacancy and project postponements and cancellations. There is also the possibility of another downturn beginning late this year or in early 2021 as temperatures cool and viral spread accelerates. Of course, it is conceivable that outcomes will prove far more benign than expected if a vaccine becomes widely available and the federal government passes a meaningful infrastructure package.” 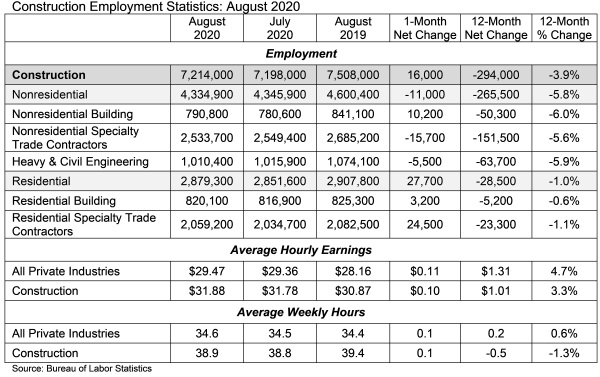 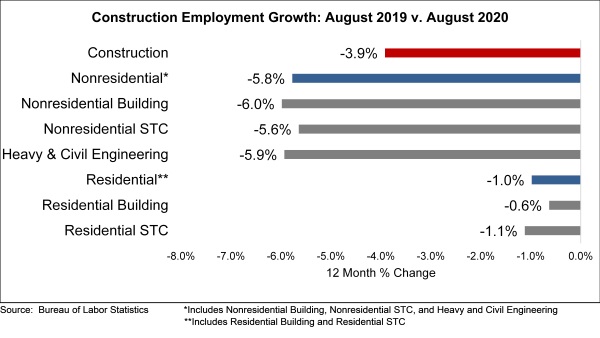 This course will bring to life the village that navigates rainscreens and cover elements from moisture management strategies to maximizing thermal efficiency through the mitigation of thermal bridging.
View All Submit An Event