Brown has worked for Woolpert for close to 18 years. The son of a U.S. Army officer, Brown served in the U.S. Air Force as a civil engineer officer before joining the firm’s Fairview Heights, Ill., office. He has managed many of the firm’s multimillion-dollar military planning and design contracts, overseeing complex projects within strict budgets and tight schedules. In his new position, he will provide vision and direction for Woolpert’s federal design practice. 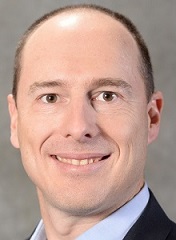 Brown said one of the many high points in his career at Woolpert came early, when the firm began its long relationship with the Department of Defense Education Activity (DoDEA). DoDEA is one of only two federally operated school systems responsible for planning and managing K-12 educational programs globally on behalf of the U.S. Department of Defense (DoD).

“Back in 2004, I was working as a young project manager trying to learn from the ground up about the military project cycle,” Brown said. “Our work with DoDEA provided me with an opportunity to learn and grow quickly within this progressive 21st-century design environment, and it opened the door to future contracts with DoD schools worldwide. We’re still doing work with DoDEA now—16 years later.”

He said working with the U.S. Army Corps of Engineers (USACE), Louisville District, has also helped enrich and define his career. Woolpert has worked with the district for many years, but the recent body of work started with several projects in 2008, transitioning to a large indefinite delivery contract for design in 2014, and on to the present.

“That first contract provided a great convergence of our experience, our capabilities and our military design presence here in the Midwest,” Brown said. “That continuing relationship has allowed Woolpert to engage in a lot of interesting projects and put us in an ideal position to support the Corps of Engineers by working hard, getting the right people in place and growing to meet their evolving needs. We’re on our fourth USACE Louisville contract right now.”

Brown is equally dedicated in his personal life, serving as a founder and vice president of Joshua’s Great Things, a nonprofit, charitable foundation that funds pediatric brain tumor research and family support programs. Since starting Joshua’s Great Things in 2013, the organization has raised over $225,000 for research and has helped 200 families during their cancer treatments.

“Doug is an outstanding member of our team and an even better person,” Ziegman said. “He is adept at leadership and design, and his relationships with clients are excellent because they know they can trust him to deliver what they require every time. We are honored that he will have a larger impact on the future of the company in this new role.”

Over the next five years, Brown said he expects the firm to continue to expand its reach and capabilities to support the U.S. Armed Forces domestically and overseas, as well as support a growing number of other federal agencies.

“There are many opportunities out there for this market, as well as many needs,” Brown said. “Woolpert’s level of sophistication continues to increase to meet this demand. We have big dreams and big expectations, but they are based on history, growth and an unwavering focus on serving our clients. So far, the dream is working for us.”