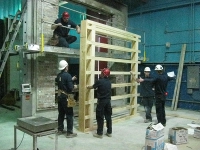 GLENVIEW, Ill. — The National Frame Building Association(NFBA) has successfully achieved a three‐hour fire rating for a post-frame wall system that can now be incorporated into a post‐frame building without having to go to more expensive nonwood framing systems.

Full‐scale testing of a three‐hour post‐frame fire wall by Underwriters Laboratories(UL), Northbrook, Ill. showed for the first time that a wood‐constructed assembly is a viable alternative to a traditional block wall system. UL testing was completed in Dec. 2011.

An hourly rated wall— rated as high as three hours—is often required to separate building areas or occupancy types to meet the IBC requirement for life safety. For architects, builders, and engineers, that traditionally has meant using a rated 8‐inch or 10‐inch concrete block wall on a concrete foundation, but with this recent test exceeding hour‐rating expectations, that may no longer be the case.

Post‐frame wall assembly is an extremely economical alternative, Shirek says. “We began testing work for this project in early 2011, knowing that, from an industry standpoint, we could create a wall that was much more cost‐effective than a typical block wall, which costs $12−$15 per square foot. We felt that a post‐frame fire wall with drywall could potentially halve that cost.”

Shirek notes that a post‐frame fire wall is faster to erect than a stud‐wall system, a light‐gauge steel‐stud wall system, and particularly block walls, which generally require an expensive foundation. “A post‐frame wall can be built and incorporated into the natural flow of the building process, possibly saving as much as a couple of weeks in completion time.”

The test wall assembly was a post‐frame structure with four layers of two-by-six laminations in the columns, spaced 8 feet apart with two-by-four girts 16 inches on center applied horizontally on each side. The frame was then sheathed with four staggered layers of 5/8 type X drywall on both sides. All joints were non‐taped.

“We are optimistic that this test will be a building block for other approvals and possibly for other future tests that can benefit the industry,” Shirek said. Testing, which follows the requirements of the UL 263 (ASTM E119) standard of ASTM International [formerly known as the American Society for Testing and Materials], also included a stringent waterpressure test.