Preserve and Protect ASTM E2307 to Avoid Normalization of Deviance

An Open Letter to the AEC Community

In the absence of standardized fire testing, unfortunate consequences can arise. In the U.S., we’ve started to see a relaxed attitude toward firestopping in general. Over the past five years or so, fabricated panels containing mineral wool not tested in accordance with ASTM E2307 have been imported and installed for firestopping purposes. Typically installed in prefabricated curtain wall systems as a firestopping material, mineral wool insulation that is not tested to ASTM E2307 is not only in violation of U.S. building codes, but also presents a threat to the safety of building occupants. As the practice of installing firestopping materials not tested to ASTM E2307 has become more prevalent, some manufacturers are urging listing organizations to accept a smaller-scale, less rigorous test.

This article considers the role that tested firestopping materials play as part of a passive approach to life safety in perimeter fire containment solutions. All stakeholders in the commercial building sector can help guard against the dangers that can arise when a concept known as “normalization of deviance” disrupts standard practices for testing, specifying and installing firestopping materials.

Opportunistic and stealthy, fire will always seek out the easiest path of propagation. Firestopping materials properly installed in the enclosure are integral to slowing the spread of fire and smoke and extending time for occupant egress. These materials – including mineral wool insulation, hangers, attachments, mullion covers and firestop sealants – impede the ability for fire to penetrate voids at critical junctures, such as the intersection of a rated floor assembly and the non-rated curtain wall. This mode of action supports additional time for occupants to exit the building and also allows firefighters time to reach the floor of fire origin.

The intense temperatures and pressure that occur during a fire can give flames an increased momentum, threatening both the structural integrity of the enclosure and the priceless lives of occupants and firefighters. For that reason, ASTM E2307 subjects firestopping materials to extreme conditions reflective of an actual fire situation in a commercial enclosure. Such testing clearly demonstrates a crucial aspect of material science and how the materials perform specific roles in the enclosure. Simply stated, “parts are not parts.” The specific process for manufacturing a product has an influence on its performance in a given application and in specific conditions, such as a high-rise fire.

Let’s consider the conditions that occur in a high-rise fire and the performance of mineral wool insulation as a “workhorse” in the perimeter fire containment (PFC) system. While mineral wool is renowned for its fire resistance, specifically designed processes in manufacturing allow it to perform in the extreme conditions of a fire. The components included in a PFC system compliant with ASTM E2307 must be able to withstand direct flame impingement and temperatures in excess of 1,800 degrees Fahrenheit or 982 degrees Celsius while maintaining its mechanical integrity. Considering that exterior curtain wall components will start to melt/fail as early as just nine minutes into a fire, it is clear that mineral wool insulation’s ability to maintain structural strength is essential in PFC systems.

Misconceptions regarding material performance can cause confusion and lead to a situation where an unsuitable material is included in a fire-stopping application. The process used to produce mineral wool insulation is a good example of how process informs function. Manufacturing a mineral wool insulation that delivers fire protection to support a structural column in rigorous fire conditions demands different processes than those deployed for supporting acoustical performance where sound attenuation is key, or in industrial applications such as insulating ovens and kilns. Testing conducted by Owens Corning evaluating different types of mineral wool reveals that a standard mineral wool industrial or acoustical board at 4 inches thick and 4-pcf density does not provide the same level of fire protection as a certified curtain wall or safing insulation in a UL/Intertek ASTM E2307-tested and classified PFC system.

By understanding how manufacturing a material supports its function in firestopping applications, it becomes clear why the mineral wool insulation installed in PFC systems – including those using pre-insulated panels – must be tested, verified and marked by independent third-party laboratories in accordance with ASTM E2307 system testing procedures. Manufacturers invest millions of dollars annually to assure products comply with third-party quality assurance programs. Third-party testing offers architects, contractors, building owners and occupants a standard of assurance that the fire stopping materials have been subjected to intense scrutiny in evaluating life safety performance.

As the test standard that most closely resembles fire exposure at the perimeter of high-rise structures, ASTM E2307 evaluates every component’s performance as it functions as part of the complete PFC system. Despite the confidence and assurance that the ASTM E2307 test standard provides, some foreign entities are pressing to introduce a smaller-scale test as an alternative or replacement. As opposed to testing the system as a whole, the proposed smaller-scale test would evaluate test components individually and not consider how the individual components perform as part of a PFC system. As the accompanying sidebar notes, history reveals that the process of making exceptions can lead to disastrous consequences.

The most important takeaway message is this: Efforts to reduce the testing standard for firestopping materials should be rejected and ASTM E2307 should be upheld to preserve the safety measures currently reflected in U.S. building codes.

Industry stakeholder including architects, contractors, firestop professionals and manufacturers can support the preservation and protection of the ASTM E2307 testing standard.  In fact, the North American Insulation Manufacturers Association is also urging that this testing standard be protected. 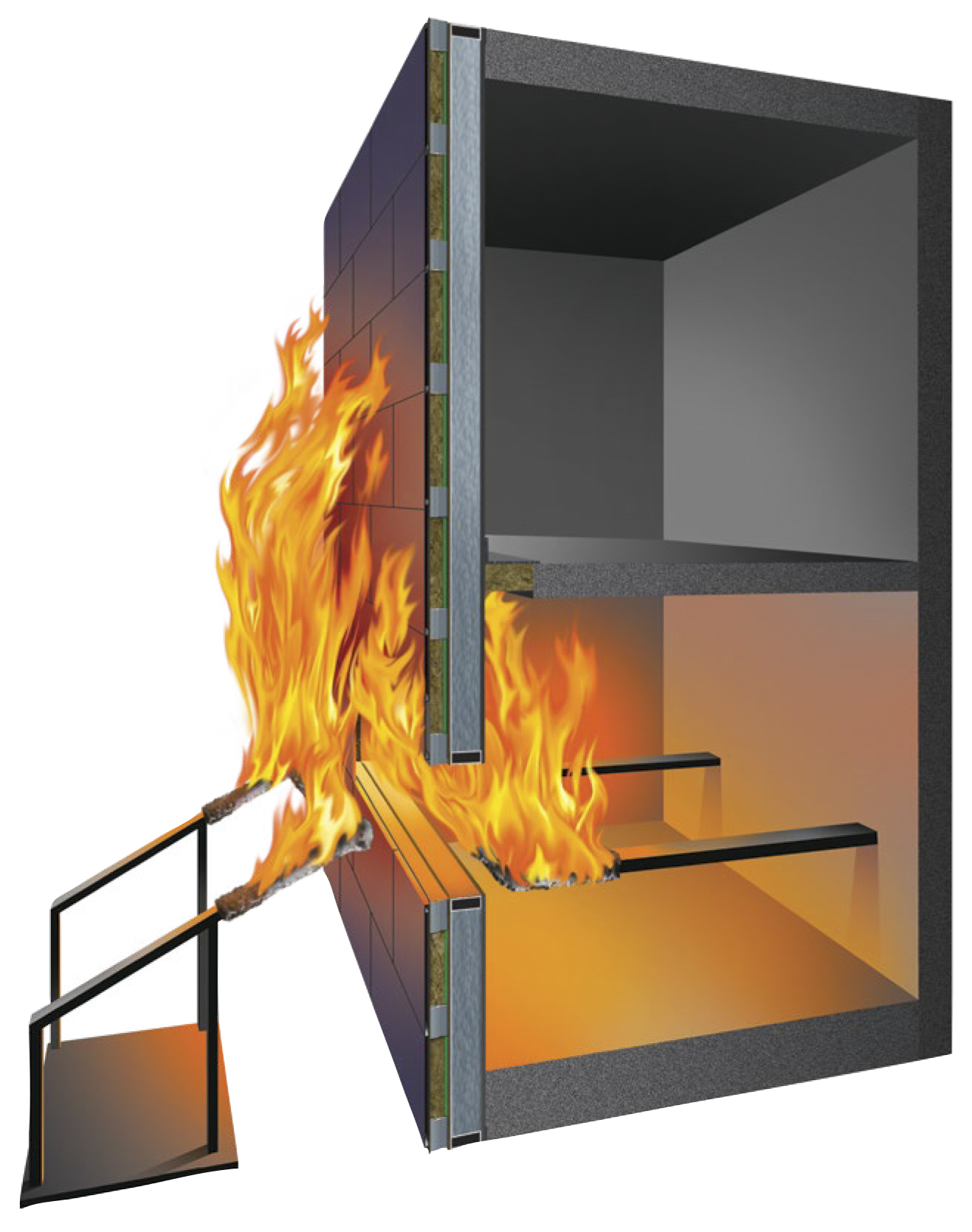 ASTM E2307 measures the ability of perimeter fire containment systems to maintain a barrier and prevent interior fire spread as the exterior wall assembly deflects/deforms during fire exposure.
A Historic Look at the Dangers of Normalization

While launching a space shuttle and designing a firestopping strategy for a commercial building are entirely different missions, tragic outcomes in the U.S. space sector serve as a warning for normalizing life safety decisions in commercial high-rise structures.

“The normalization of deviance” is a term coined by Dr. Diane Vaughan of Columbia University in an analysis of the 1986 space shuttle Challenger disaster. Normalization of deviance refers to the gradual acceptance of issues outside of normal operating parameters. This situation of normalizing “outside of normal” outcomes was also observed following the 2003 space shuttle Columbia explosion. A vast range of reports note that prior to the Columbia’s explosion, the foam insulating layer that surrounded the Columbia’s fuel tank did not always perfectly adhere to the surface of the fuel tank. As the shuttle experienced the aerodynamic pressures of launch, small fragments of the tile would detach and occasionally strike the shuttle. Because the situation occurred repeatedly without incident, the tile detachments and even tile striking against the shuttle began to be perceived as “normal” – until the Columbia exploded on February 1, 2003.

Helping to protect occupants’ life safety must always remain the highest priority when specifying and installing firestopping materials in the commercial enclosure. Adapting a smaller-scale test poses a threat to the standards that have allowed American buildings to achieve an impressive record of life safety.

The ASTM E2307 test plays an important role in helping commercial structures maintain their structural performance in the event of a fire and provide occupants with additional time for egress. Any action to reduce the integrity of this test opens the door for a culture of normalization to enter the fire stopping sector. The diligence of members of the International Firestopping Council was instrumental in drafting ASTM E2307 as the test standard that most closely resembles fire exposure at the perimeter of high-rise structures. Any effort to compromise this critical life safety structure poses a normalization of deviance risk to America’s high-rise enclosures.

Angie Ogino is Thermafiber/Owens Corning’s Technical Services Leader. Angie has over 20 years’ experience in the mineral wool and firestopping industry, providing engineering judgments and technical assistance on mineral wool product performance for architects, building officials and contractors in fire, sound, and thermal applications. Angie is the developer and coordinator of all perimeter fire containment testing for Thermafiber at Underwriters Laboratories, Southwest Research and Intertek/Omega Point Laboratories. Angie is responsible for managing Thermafiber’s UL and Intertek/OPL Follow-Up Service Quality Programs. She is also the developer of Thermafiber’s educational programs on perimeter fire containment and has presented perimeter fire containment programs at the  AIA National Conventions, as well as the CSI (Construction Specifiers Institute), PCI (Precast Prestressed Concrete Institute) and major architectural and curtain wall manufacturing firms throughout North America. Angie is also a member of the Insulation Contractors Association of America where she Co-Chaired the Commercial Construction Committee for 5 years. She is also a member of the International Firestop Council and Firestop Contractors International Association. Angie is also active in code development for IBC, Chapter 7 (Fire and Smoke Protection Features). Angie is also a LEED Accredited Professional-BD&C. Angie has a Bachelor of Science degree in Business Administration from Manchester University.