If the panels are improperly designed and installed, the service life of the roof can significantly be reduced (Photo 2). A common failure is cracking of the flat lock soldered copper seams and subsequent water leakage through the open seams (Photo 3). Although certain “best practice” guidelines by various sources have existed for years1, 2, 3, 4, the guidelines are based on practical experience instead of testing, and currently there is no industry consensus on what constitutes “acceptable” practice for constructing flat lock soldered copper seams based on in-service performance. In service, these joints are subjected to snow and wind loads, but the most demanding loads are the cyclical thermal stresses incurred during temperature swings.

This paper discusses the thermal analysis and cyclical testing that we performed under contract by the International Training Institute (ITI)5 on various qualities of 1/2-inch wide fully soldered flat copper seams to identify the minimum workmanship requirements for meeting expected in-service loads without failure over a 75-year period. This paper assumes the reader understands basics about fully soldered flat seam copper roofing. For additional information, refer to Floyd and Patel, 20166 for details on fully soldered copper roofs. 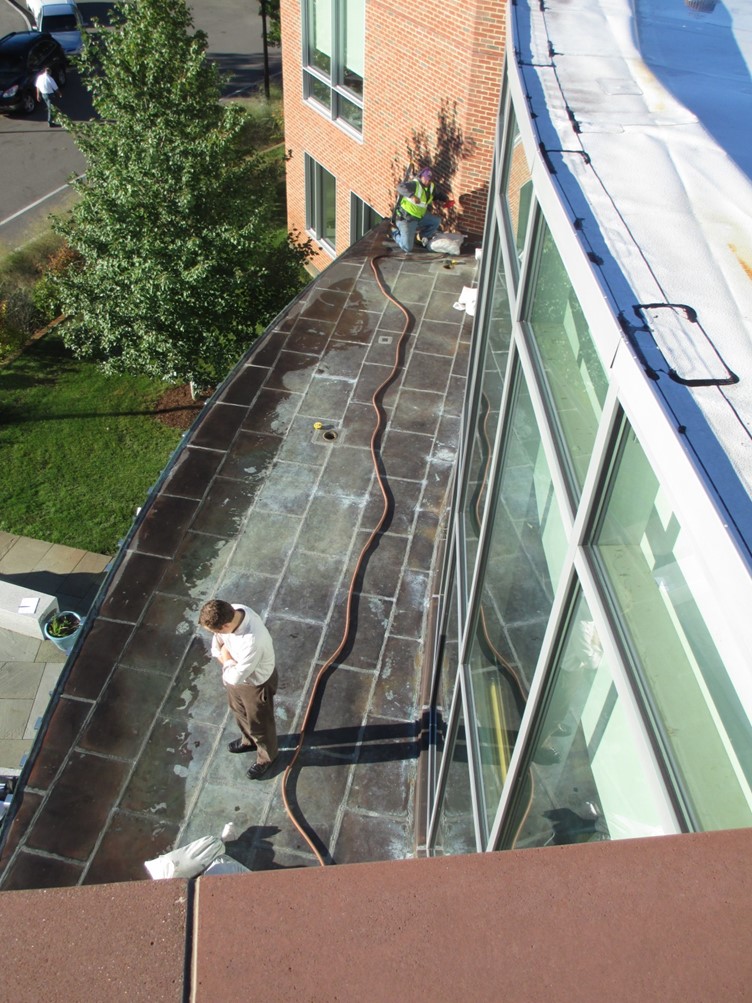 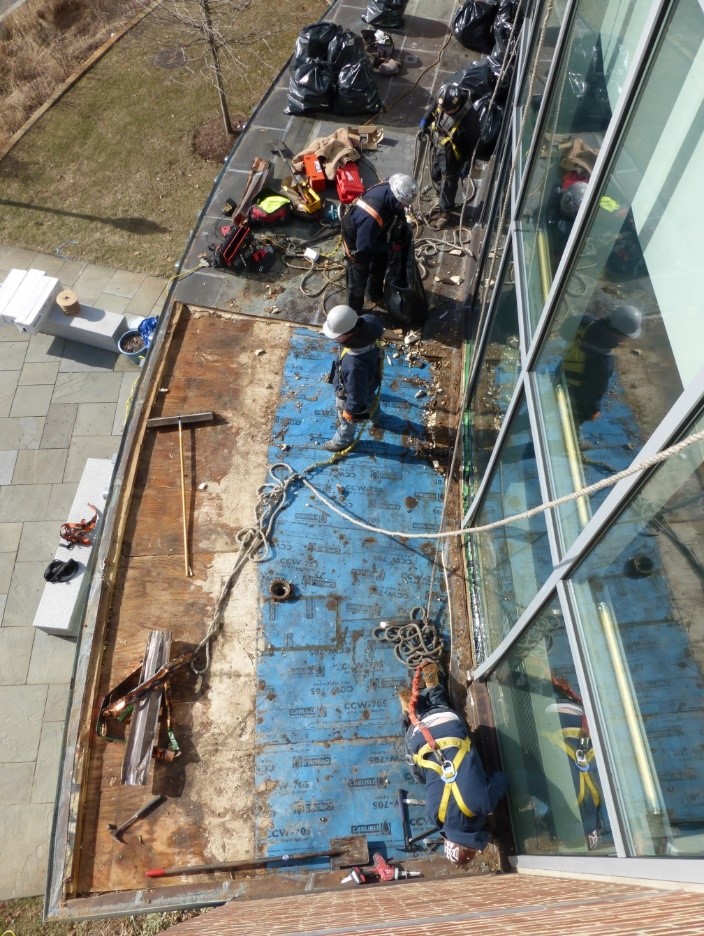 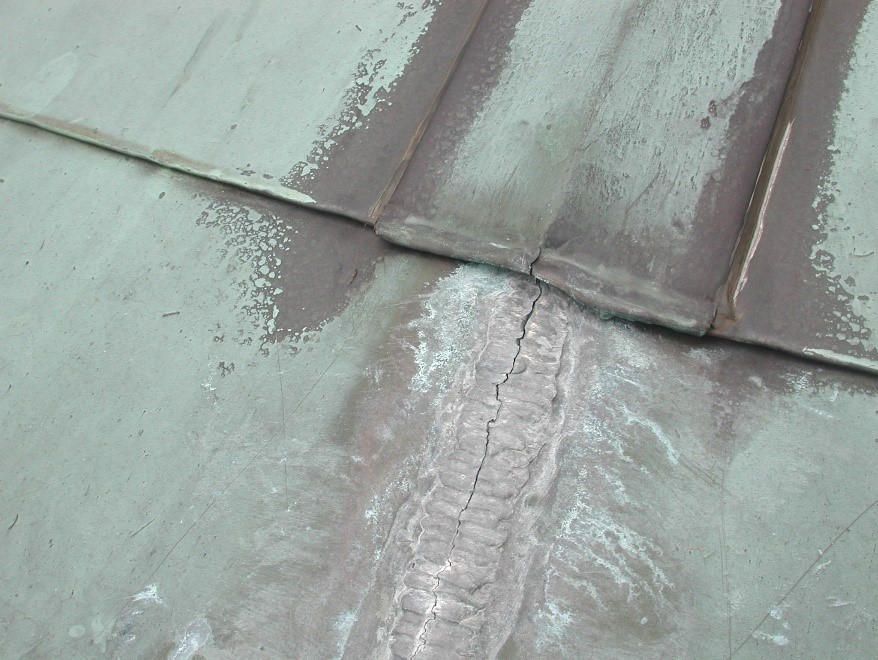 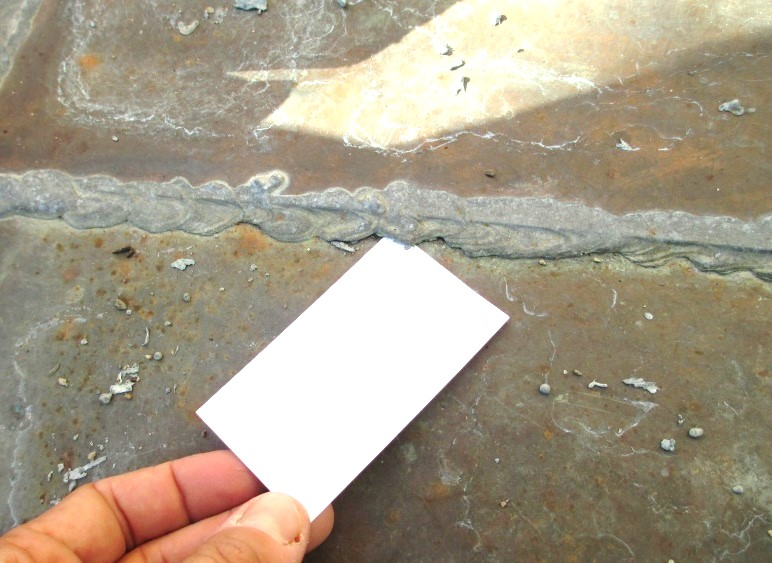 Prior to testing, we calculated the expected loading on copper roof seams due to thermal expansion and contraction. We modelled a standard flat seam copper roof assembly (plywood sheathing, self-adhered underlayment membrane, and copper panels with 1/2-inch wide soldered flat seams as required by SMACNA standards; Figure 1) in WUFI7, a thermal and moisture modeling program which uses actual weather data from various locations (temperature, solar gain, rain, etc.), and tracks temperature and moisture data for each layer within an assembly. We used this model to obtain a profile of the roof surface temperatures for a “typical” yearly cycle based on WUFI data.

The output information from WUFI provides the amplitude of temperature swings through the system throughout a typical year at the following locations modelled: Boston; Boulder; Miami; Phoenix; and San Diego. We modeled each location using new copper and aged copper (brown color) and found that the resulting temperatures were higher for aged copper temperatures in all cases; therefore, we used aged copper for all of our models. As the copper roofing is typically attached to a plywood substrate, thermal stresses in the copper panel seams are primarily due to differential movement between the copper and the substrate. We reviewed the difference in temperature between the copper and plywood over time, shown in Figure 2 for Boulder, Co., below. We used this parameter to calculate the thermal loads within the panels. 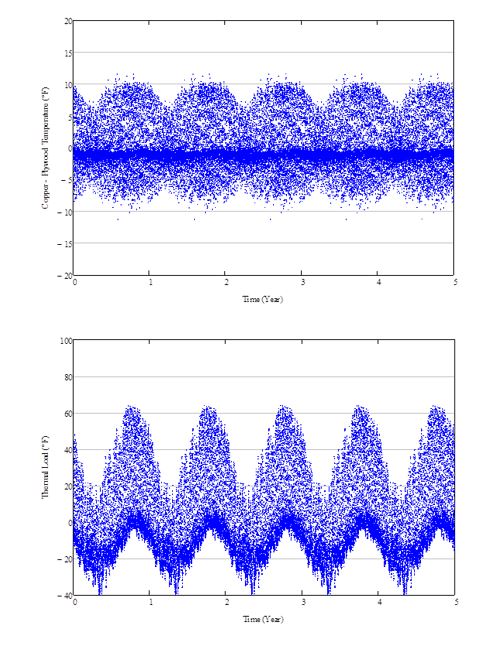 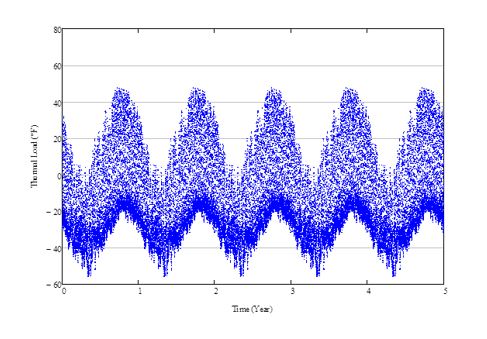 Using the cyclical temperature data from WUFI, we evaluated the resultant stresses at copper roof seams using a finite element analysis (FEA) model of the thermal cycling of a typical flat seam copper panel assembly. The FEA model determined the forces generated within the soldered seams due to thermal cycling, accounting for deformation of panels (i.e., buckling) that helps reduce thermal stresses. Figure 3 shows a typical FEA output. We then computed stress range cycle counts from the seam stress time history. The result was a summary of cycles within the soldered seams, away from corners and cleats, for each of the five locations studied. The summary table provides useful information regarding the annual cyclical load demand on the soldered flat seams in a panel assembly in various climates (Table 1). Based on this parametric analysis, the Boulder, Colorado, location had the highest number of cycles at various stresses (Figure 4).

The International Training Institute (ITI) provided soldered copper flat lock seam samples that represent varying levels of workmanship. To provide a range of conditions, the samples were prepared using five different methods by varying amounts of pre-tinning, extent of soldering through the joint, soldering speed, and amount of solder used. ITI prepared 5 groups of samples using standard practices intended to result in the highest quality solder joints. In each subsequent group of samples, the preparation method was altered to result in variable-quality solder joints. Preparation methods for each group consisted of the follow:

We received all samples, evaluated, and recorded the following parameters (Figure 5):

We evaluated each specimen based on the above-listed parameters prior to and after testing was completed. We recorded measurements for each parameter on both sides of every copper specimen.

We performed the testing by inserting the flat seam solder samples into an Instron hydraulic universal tester and applying cyclic tension and compression loads equivalent to the annual thermal cycles corresponding to one year of service life in Boulder (Figure 4) repeatedly until either the flat seam copper samples failed or we reached the equivalent of 75 “years” of service life. At failure, we recorded the number of annual cycles to determine the effective service life of that sample. We then inspected all samples to correlate the failure mode and effective service life with the parameters noted above. 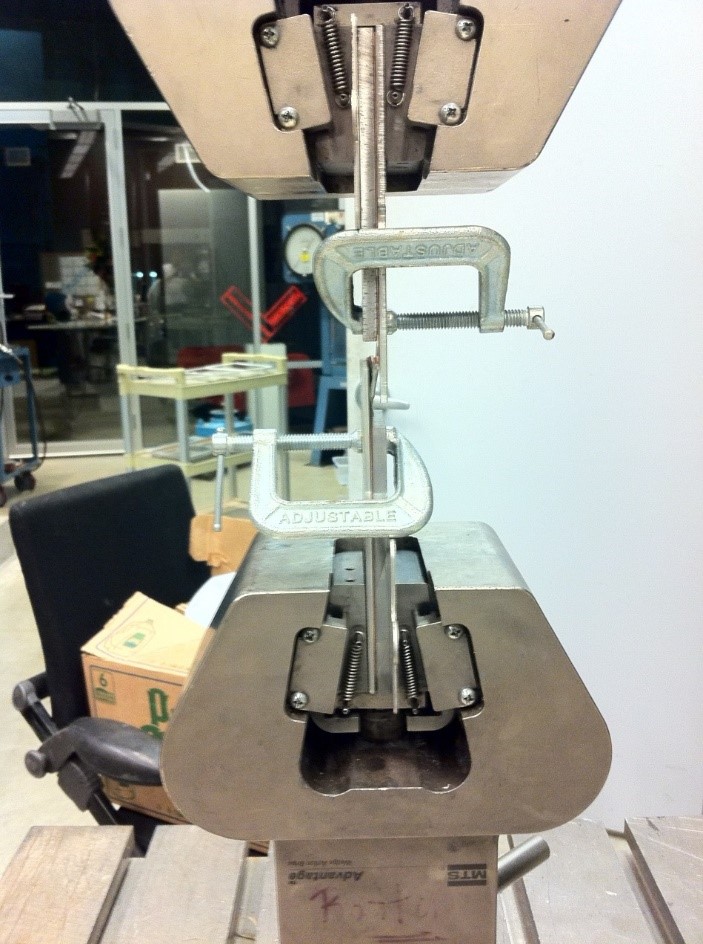 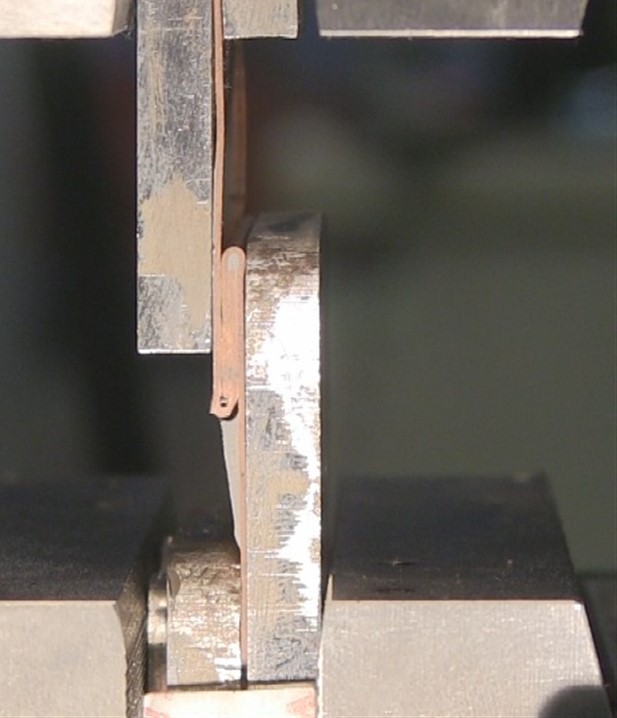 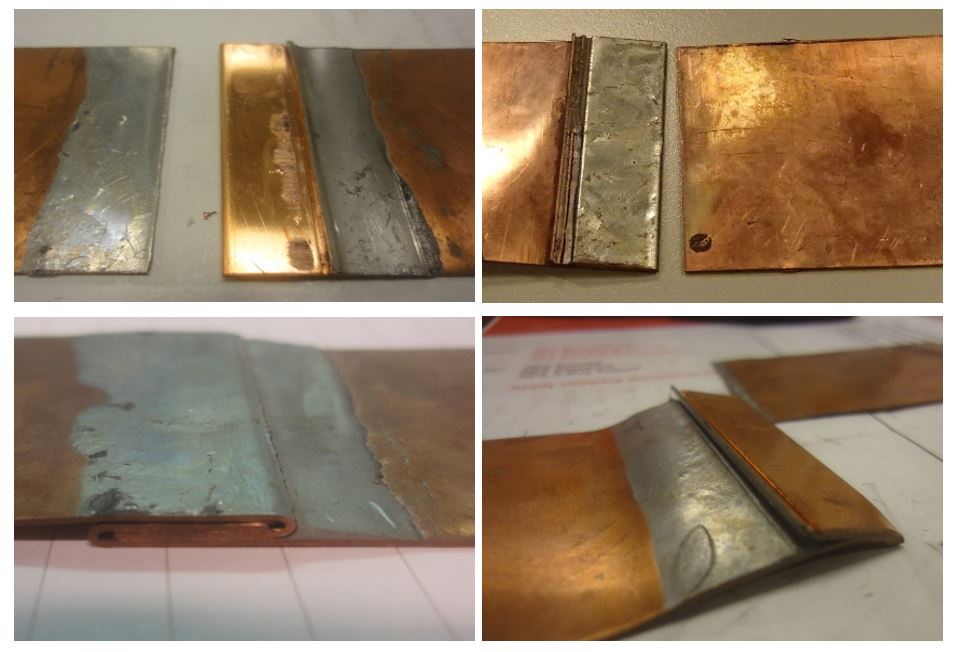 Based on our analysis and cyclical testing, we summarize the following for each group of samples:

Our testing shows the most important factor in determining the quality of a copper soldered seam is the extent of the solder sweated through the seam. A copper seam with solder extending into the third leg can be expected to surpass a 75 year service life. In practice, full sweating is more difficult on wider flat seam joints and those that are not properly fit together in the field; our testing demonstrates that 1/2-inch wide joints are adequate if properly sweated (Photo 6).

Further, the test data showed the following regarding the effects of various physical conditions to the service life of soldered joints: