The design team, consisting of ZGF Cotter Architects, Fast + Epp structural engineers, and ITC Construction Group, paid close attention to energy-saving measures at the building envelope to minimize costs and carbon footprint, and improve occupant comfort. Copious amounts of insulation were applied on the walls, roof and other areas. Mineral wool was placed in the window wall assemblies. Foamed plastic insulation was sprayed on the cast-in-place concrete exterior walls. Foamed plastic insulation board was applied at the roofs, and cellulose insulation was spray-applied at the slab soffits under occupied space in the underground parking.

However, 37 floors of condominium balconies posed a potential thermal bridging problem. If cast conventionally, as cantilevered extensions of interior floor slabs, balconies would conduct heat away from heated interiors and dissipate it into cold environments like cooling fins, wasting heat energy. Chilled floor slabs inside of the building envelope would cause discomfort for occupants. Condensation on cold adjacent interior surfaces would additionally support mold growth, an increasing problem in today’s air-tight, high-humidity buildings.

The design team studied options to prevent thermal bridging at the balconies, and ultimately decided to insulate them from the supporting slab using structural thermal breaks.

The team had originally envisioned pre-cast concrete balcony slabs extending from the sides of the building. 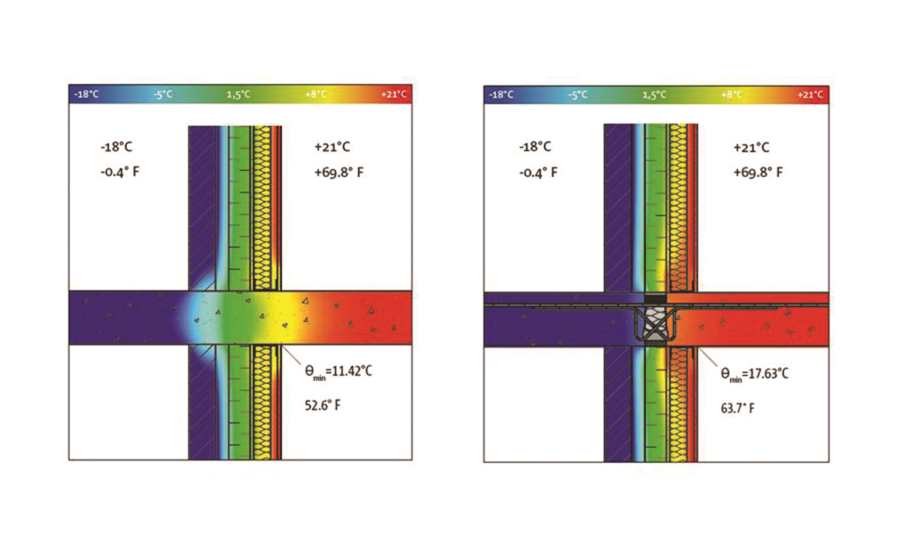 - Thermal breaks reduce the risk of condensation and mold.

Design work for the project began in 2012 and ground was broken two years later by the ITC Construction Group.

Structural thermal break modules are positioned in line with other building envelope insulation, and are tied into the rebar of the interior floor slab and the exterior balcony slab prior to casting both in concrete.

Since BC has a history of seismic activity, the design team also specified Isokorb Type CEQ structural thermal breaks for earthquake load transfer in concrete balconies.

"All of the thermal breaks were placed on the slab formwork toward the end of laying the rebar for the slab. Concrete for the floor slabs and balconies was poured at the same time,” he continues.

Coordination among the trades ensured the project’s success. Blair Marriott, Senior Superintendent of ITC Construction, says, “We organized site meetings with the sub-trades, particularly with shoring contractors to ensure they understood the proper load paths. The team commitment resulted in success.”

As further energy enhancements, the structural engineer says, “In-slab hydronic radiant heating/cooling tubing mats distribute heating and cooling to all of the units. The energy originates from the City of Surrey District Energy System, and is distributed through the building in a continuous ambient hydronic loop. Dedicated heat recovery chillers extract the energy from the loop and transfer it to holding tanks until it is called again to heat or cool the units.”

The developers followed the 2012 British Columbia Building Code in the building’s design, the engineer adds, stating, “The structural thermal breaks posed no problems in conforming with the code.”