New York City produces over 50 million tons of carbon dioxide a year, more than half of which comes from its own buildings which are the leading carbon emissions sources in the city. Now, the Big Apple will be undergoing big changes in light of the city’s new legislation—the Climate Mobilization Act.

Passed by the New York City Council, this set of bills will enact significant changes to New York’s energy efficiency efforts by setting carbon emission caps for many of the city’s monumental and historic buildings (including Trump Tower and the Empire State Building) in the interest of sustainability. These caps will significantly reduce the city’s carbon emissions, including greenhouse gas emissions, nitrogen oxides, sulfur oxides and other particulate matter.

The Climate Mobilization Act is a welcome addition to New York’s climate action plan in ensuring a cleaner, healthier environment for all current and future New Yorkers. It will also stand as an example for other cities looking to create their own climate justice movement in fighting climate change. In total, it will affect almost 60 percent of the city’s current building stock, amounting to 50,000 structures.

In New York City, the climate crisis is not only of grave concern with the current infrastructure and building stock, but also as it relates to the city’s population which is at a record high. Projected to surpass 26 million by 2050 from its 23 million regional population today, new housing construction has reached its highest levels since the 1960s and the high-density growth is fueling the need to ensure that the city’s growing population and strong economy remain foundational to meeting future aspirations.

“Instead of building owners having to meet ever-changing energy requirements that are updated every few years with every code cycle, this bill sets a clear target and lays out a pathway to get there.” – Stas Zakrzewski, Principal, ZH Architects and Vice President of New York Passive House (NYPH)

Included in the legislation are three key bills that offer valuable energy-efficiency solutions in terms of heating, cooling, and renewable energy capture and usage, all focused on reducing air pollution.

Bill 1253 (Local Law 97 of 2019) will require existing buildings to meet the specified requirements by retrofitting energy-efficient upgrades including windows, smart HVAC systems and other energy-conserving construction products. This bill also announces the city-wide commitment to achieve certain reductions in greenhouse gas emissions by 2050. To provide some relief to building owners, Bill 1252 will establish a sustainable energy loan financing system titled the Property Assessed Clean Energy (PACE) program that provides renewable energy credits and emissions offsets for installations or improvements made.

Bill 1032 (Local Law 94 of 2019) introduces changes to New York green roof requirements (green roofs are those covered in plants), applicable to all new buildings, building expansions and structural roof work. The intention of the bill is for all available roof space to be covered in green or cool roofs, solar, or both, with the installations required for residential or commercial buildings that meet a variety of occupancy group criteria within the New York City building code.

According to the Energy Efficiency for All New York Coalition, the Climate Mobilization Act will generate thousands of construction jobs, and lower operating costs once new measures are in place. Legislators have also embedded flexibility within the program to support green building in NYC. There is an up to 100 percent deduction offered from annual emissions limit for the purchase of credits for renewable energy in NYC in addition to deductions available for the purchase of greenhouse gas offsets (up to 10 percent) and peak energy storage for 2024-2029 limits.

The ground-breaking legislation is a clear indication of New York City’s support for the climate change movement and will be rolled out with a gradual build toward increasingly stringent CO2 emission limits as outlined below, as the city works toward net zero building design and construction on future infrastructure projects. 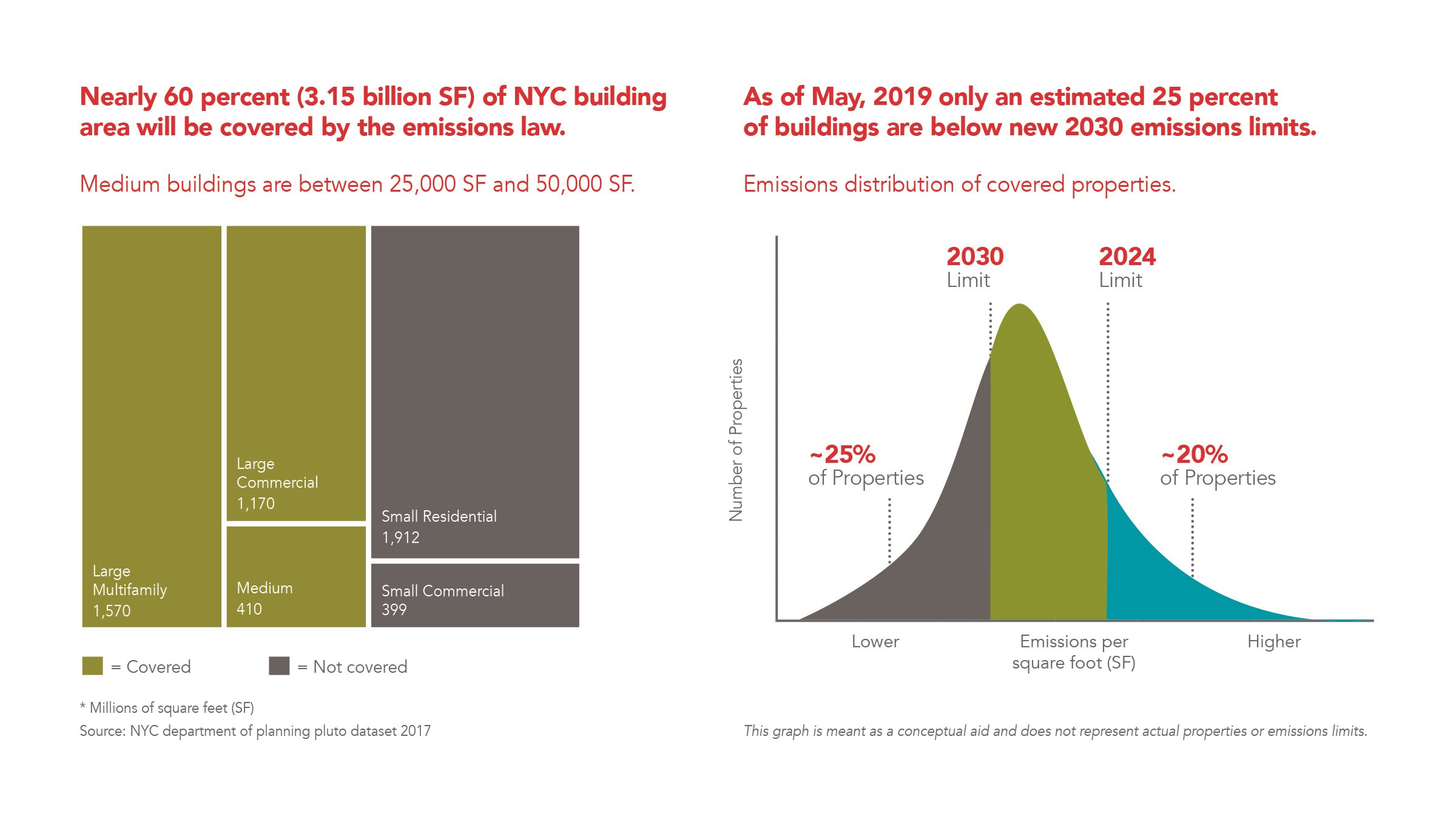 “This law sets tough requirements for buildings to reduce carbon emissions. But it does so with innovative policy approaches that make it possible.” – John Mandyck, CEO of Urban Green Council

The Climate Mobilization Act is pushing more aggressive and ambitious legislation both for new construction and building renovations or retrofits, in an effort to achieve climate restoration. As NYC energy consumption climbs (New York City buildings contribute to nearly 70 percent of New York’s carbon emissions), the city chose to address those buildings mentioned earlier that fulfill the criteria of being greater than 25,000 square-feet, which are responsible for 30 percent of the city’s total carbon emissions.

Setting carbon emission caps along with other legislation is one of the biggest and most ambitious climate restoration initiatives to come to fruition and some of the ways to reduce carbon emissions globally as we’ve seen in other cities, states, and regions. To date, NYC has made some headway in the positive direction on reducing greenhouse gas emissions.

New York City has taken a very aggressive approach to combatting climate change. As buildings in our dense metropolis contribute the bulk of our carbon emissions, making a substantial reduction of impact can only occur if we address the energy performance of our buildings (new and existing alike). 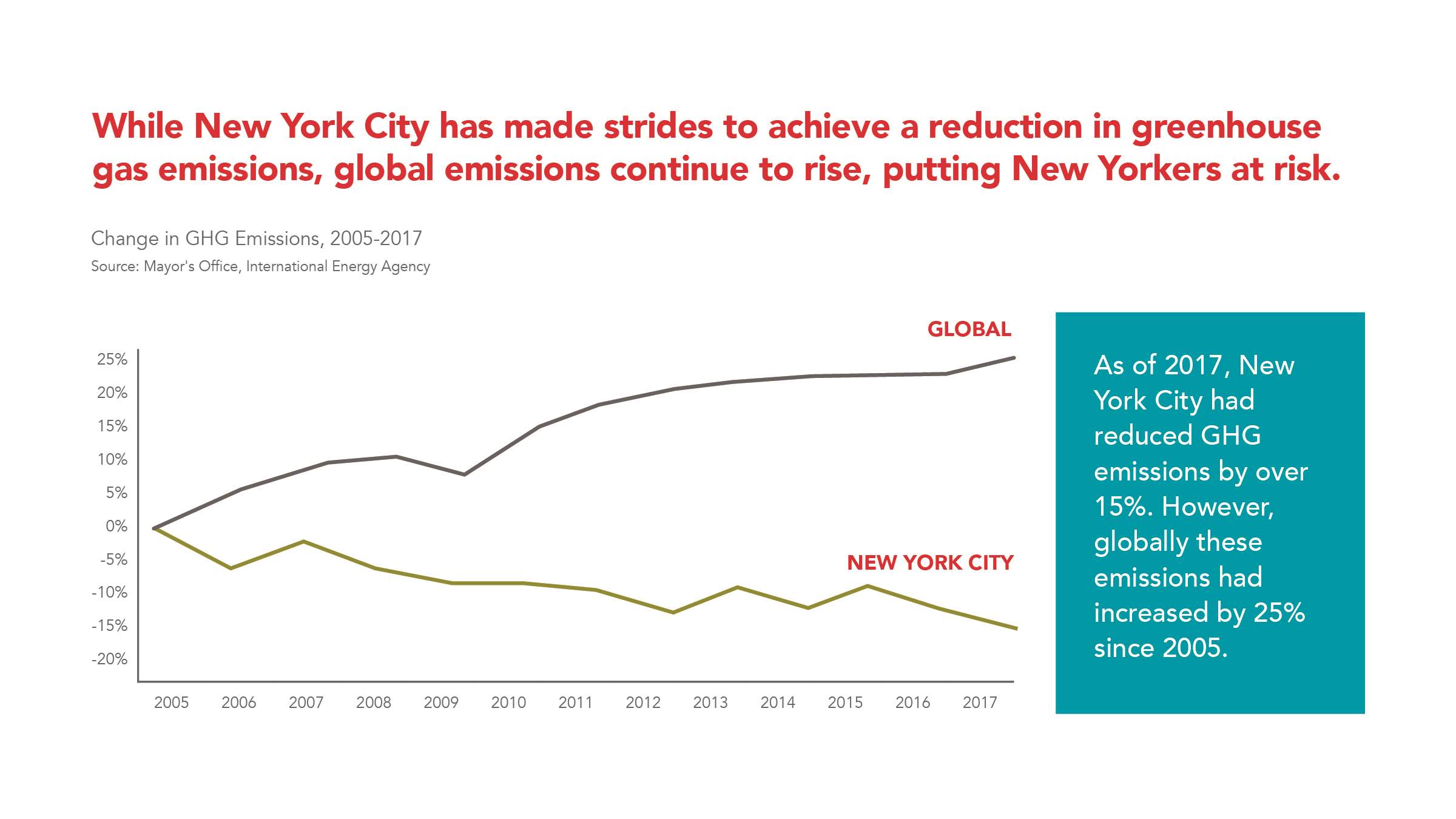 The Green Light on Green Construction with Passive House

It’s time for architects, designers, building owners and community members in NYC to think about green living and green architecture. Building owners who fail to meet the requirements of this legislation can face fines as high as millions of dollars. Designing structures with energy efficiency in mind can sometimes put limitations on design freedom and flexibility, but it means they are built for long-term sustainability.

Passive House is a building concept that is geared toward achieving superior energy efficiency and comfort for occupants. New York City is already starting to implement high-performing and energy-intelligent solutions through passive house construction. Using Passive House standards and principles reduces 90 percent of heating and cooling energy and up to 75 percent of primary energy usage from standard building construction.

Through concepts like Passive House and new legislation like the Climate Mobilization Act, we can help to limit our carbon footprint in New York City and places across North America as we continue to find solutions in building a brighter future for all.

The adoption of the new Climate Mobilization Act legislation reinforces NYC’s commitment to achieving a reduction of carbon emissions 90% by 2050. It’s exciting to be in the heart of it all with the eyes of other major cities watching and preparing to do something similar.

*This is condensed content based on a longer article.  To read the full article from its source, visit: https://www.rockwool.com/blog/nyc-green-building-law-takes-aim-at-building-energy-efficiency/

Todd Kimmel, CPHD (Certified Passive House Designer), CDT, is the New York City Architectural Manager for ROCKWOOL Insulation. Todd has over 18 years of technical experience working on building enclosures and façade systems. This includes the management and oversight of large-scale commercial building enclosures, working as the product and technical manager for Trespa® North America, and as a Technical Consultant for Dörken Systems. Todd is a Construction Documents Technician (CDT), a Certified Passive House Consultant (Passive House Institute) and currently sits on the board for New York Passive House (NYPH). He holds a Bachelor of Science Degree in Civil Engineering from Northeastern University and a Master’s Degree in Urban Planning from New York University’s Wagner School of Public Service.
Andreas M Benzing is the founding member of A.M. Benzing architects PLLC. He received a Master of Science in Architecture from the Bauhaus University Weimar and a Master of Design & Management from the Politecnico di Milano. Andreas is licensed to practice architecture in New York State and in Germany. He is a LEED Accredited Professional, Certified Passive House Designer and a Building Performance Institute Certified Building Analyst and Envelope Professional. He is a founding director and President of NY Passive House – a non-profit organization to promote the Passive House standard for a healthy, comfortable and energy-efficient built environment. Andreas has been appointed by the Manhattan Borough President to serve on Manhattan’s Community Board 5 and was appointed by the DOB Commissioner to serve on the 2015 and 2019 NYC Energy Conservation Code Advisory Committee. Andreas teaches Environmental Technology and Design Studio at The New School.
You must login or register in order to post a comment.