The Countdown to Zero Net Energy

Did you know that buildings are one of the largest energy consumers of any sector? According to the U.S. Energy Information Administration (EIA), residential and commercial buildings account for 40 percent of energy use in the United States and 74 percent of the electricity use.

The European Union (EU) has early experience with net zero energy buildings as well. New construction in Europe is to be “nearly” net zero by 2020. Buildings owned and occupied by public authorities must reach this goal by 2018.

What is Net-Zero Energy Building
The first word that comes to mind when one hears “net-zero energy” is FREE. In simple words, net-zero energy building is when a building produces as much energy as it consumes, which means the total amount of energy used by a building on an annual basis is roughly equal to the amount of renewable energy produced or used by that same building.

More in depth, a NZEB can be defined in several ways, depending on the boundary and the metric. The National Renewable Energy Laboratory (NREL) presents four definitions for net zero energy, including: 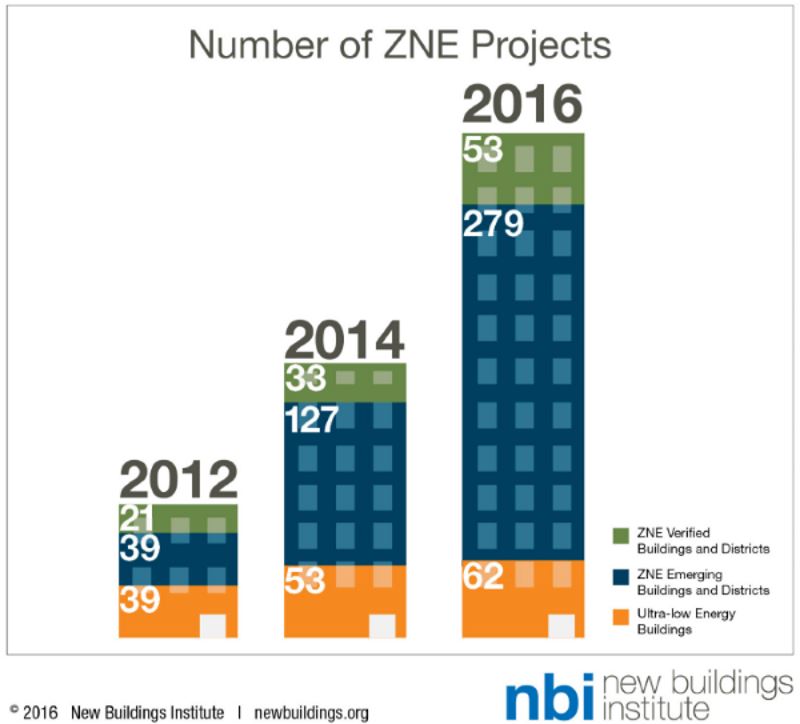 Net zero energy is often confused with Leadership in Energy and Environmental Design (LEED); while LEED and NZE buildings are both sustainable, they are different in several ways.

Where LEED’s goal is more focused on saving the environment, NZE’s focus is to reduce energy usage. LEED uses a point system; NZE’s metric focuses on the amount of renewable energy employed. LEED does not focus on final energy performance like NZE, but rather emphasizes the materials used for the project. And unlike LEED’s point system and certification, NZE is performance-based, requiring buildings to operate at least a year at stabilized occupancy before it can be verified as NZE.

The methodology is simple - the more efficient the building, the less energy has to be generated to achieve net zero. Unlike traditional buildings, engineers should be involved early on to help plan for a true NZEB. Regardless of the definition or metric used for a NZEB, minimizing energy use through efficient building systems should be a fundamental design standard and the highest priority on all NZEB projects.

Determine an Energy Use Intensity (EUI) for the building, which is the annual building energy use per square foot per year, and focus on energy efficient equipment and materials, as well as energy reduction techniques. Finally, calculate how much renewable energy will be needed to achieve net zero.

To determine how much energy needs to be generated, measure the on-site usage. Measurements are divided into four categories:

Greentech Media’s research has shown that NZEBs require “a premium of less than seven percent in extra construction cost for buildings 50,000 square feet or less to achieve less than 30 kBtu/sqft.” For reference, the national average EUI for all U.S. commercial building is 93 kBtu/sqft.

Likewise, NREL came to a similar conclusion, stating “the transfer of cost from HVAC capacity to architectural elements allows energy efficiency with little to no incremental cost increase.” In other words, increases in efficiency in one trade allow lower costs in another.

In a 2012 study, the New Buildings Institute found NZE design and construction had been achieved at incremental costs of 0-10 percent in comparison to standard practices. A federal tax credit is also available in some states for solar energy systems, as well as rebates and other savings.

As of 2016, there were 332 verified net zero buildings in the U.S., and nearly 10 percent of those are K-12 schools with an additional NZE school emerging (not yet verified) in Irving, Texas. What seemed impossible several years ago is our reality today.

Ashley Wang is a project executive and senior electrical designer for PBK Architect’s LEAF Engineers. Wang has more than a decade of experience on power, lighting designs, load calculation and analysis, short circuit calculation and all other electric design. Wang graduated from the University of Houston.

The Path to Zero Net Energy