Still, the type of roofing is one of several risk factors affecting the threat lightning poses to a structure, according to the National Fire Protection Association (NFPA) 780 – Installation of Lightning Protection. The recognized North American standard includes a Simplified Risk Assessment procedure to help designers determine if an LPS is recommended for a building. It recognizes that, when a lightning strike does occurs, a building has less risk of being devastated by fire if it has a non-combustible metal roof. (See sidebar.)

The risk assessment calculations can now be performed using a free, online app at bit.ly/NFPA-780calculator that enables designers to, quickly and easily, make better-informed decisions and demonstrate that they have met the standard of care expected of building industry professionals. (See bit.ly/StandardOfCare). 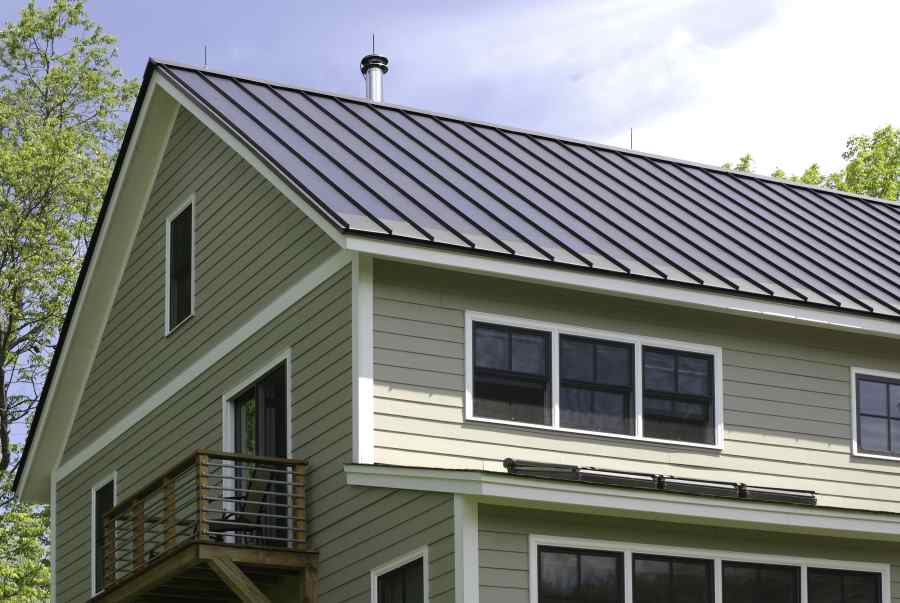 Lightning is a Grave Danger

Metal buildings are “Resilient by Design,” according to Metal Building Manufacturers Association (MBMA). The organization’s website cites metal’s sustainability, durability, and resistance to earthquakes, severe winds, and a host of dangerous natural phenomena. Perhaps we can forgive them for not mentioning lightning as one of those hazards; individual lightning strikes don’t get the headlines produced by large regional disasters. 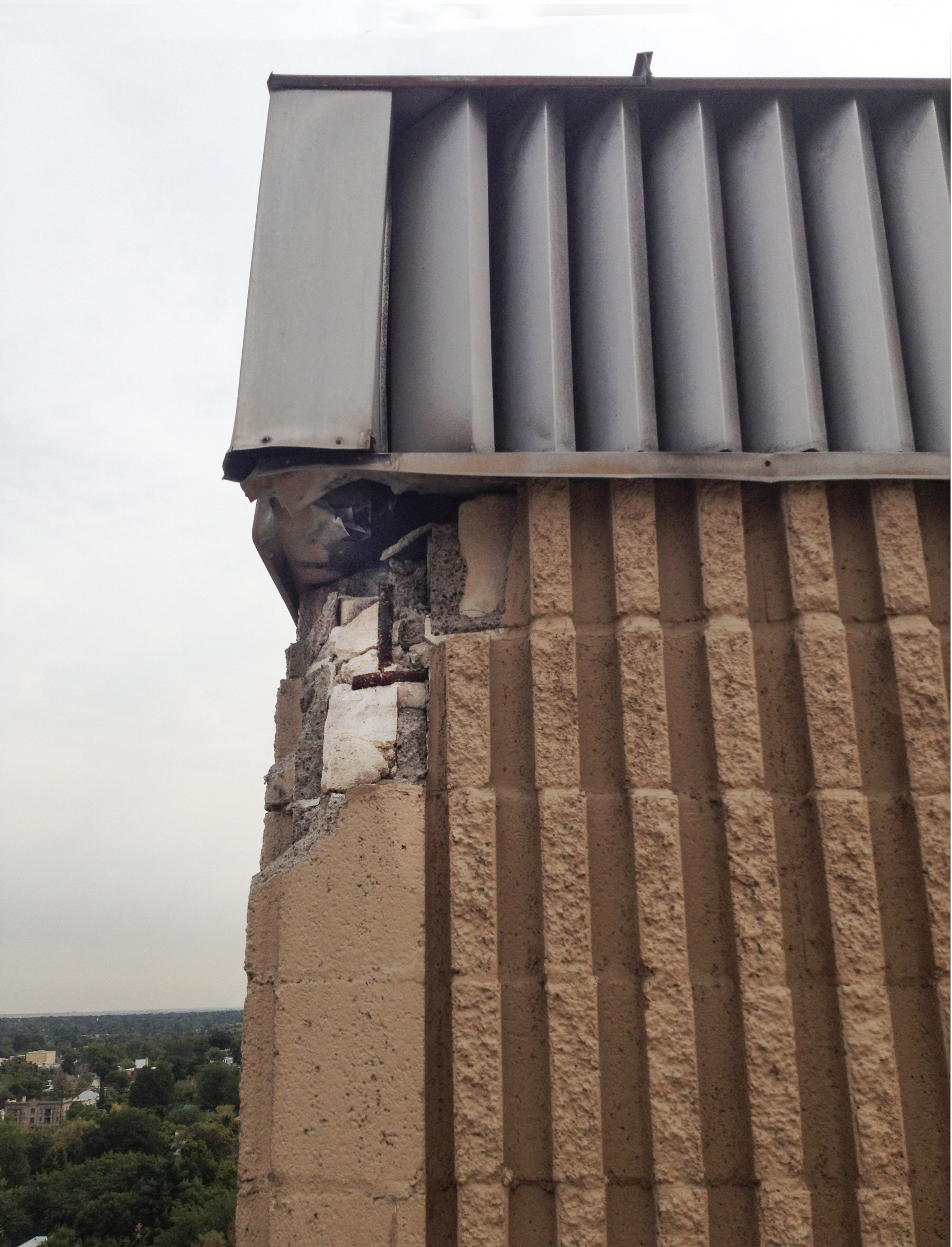 Yet in a typical year:

And the situation is getting worse. Lightning events are predicted to increase due to changing weather patterns. The cost of lightning damage is also growing due, in part, to the proliferation of sensitive electronic devices that are vulnerable to lightning surges.

A lightning protection system is recommended if building’s exposure to lightning exceeds tolerable risk as calculated based on following:

Regardless of the outcome of the risk assessment, protection should be given serious consideration if any of the following are factors: 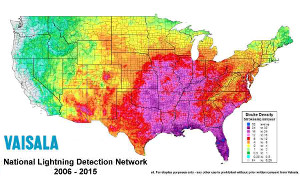 Every state is vulnerable to lightning (even Alaska and Hawaii, not shown on map). Low risk is not the same as no risk, and designers should conduct a lightning risk assessment for each structure. Photo courtesy of Vaisala.

Lightning protection is not mandated under the national building codes, but is required in some local codes, by certain government agencies and, by an increasing number of sophisticated building owners.

In other cases, the NFPA risk assessment should be conducted by building designers or lightning protection specialists and the results discussed with building owners.

The specific layout of the LPS can usually be delegated to an LPS installation specialty contractor employing a Master Installer/Designer or Master Installer certified by the Lightning Protection Institute (LPI), see www.lightning.org.

The designer will work with the project team to coordinate locations of and installation schedule for penetrations through the building envelope and connections.

The installer may have to be on the site early in construction to install ground electrodes and bond the LPS to rebar in foundations, and may be one of the last to leave at the end of the project when final connections are made and tested.

Third-party inspection services are available through UL, LLC and LPI-Inspection Program and should be part of the building commissioning process.

It Takes a System 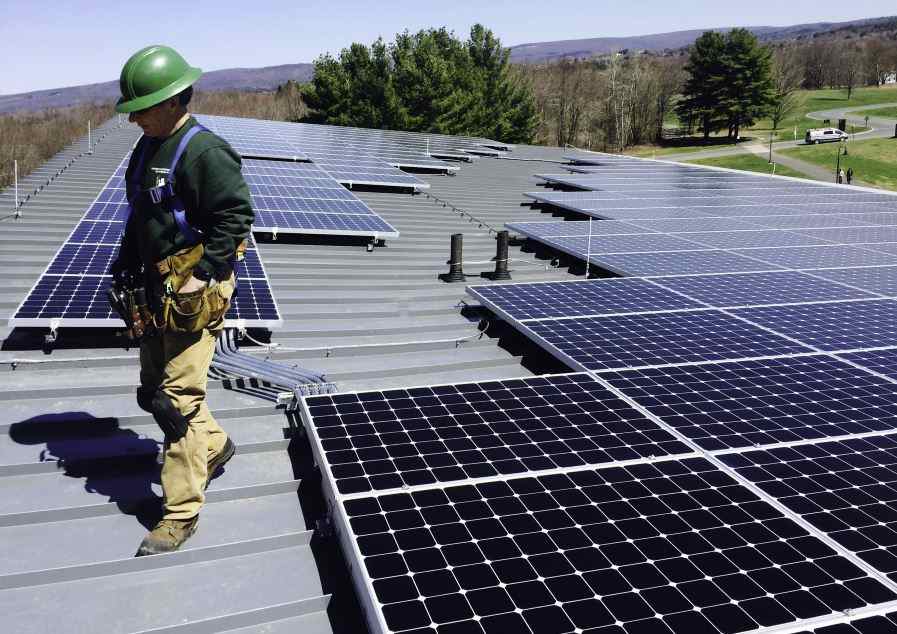 Air terminals rise 10 inches or more above a building to intercept lightning before it reaches the structure. Lightning is modeled as a 300-foot diameter sphere being rolled over a building’s envelope; anywhere the sphere touches the building is susceptible to becoming lightning’s attachment point. 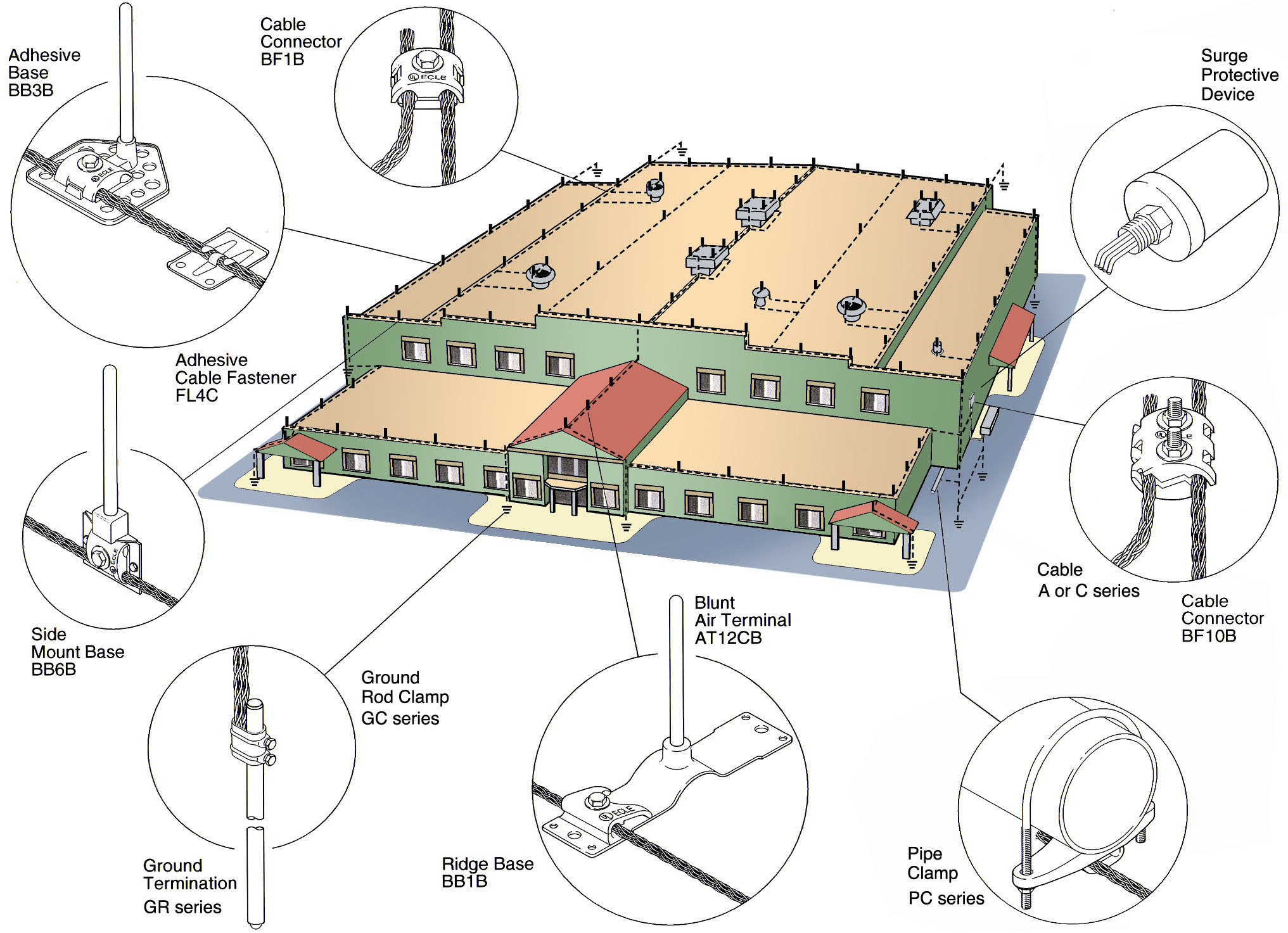 Based on this, NFPA 780 requires air terminals at roof corners and at intervals not exceeding 20 feet along roof ridges and edges; a very wide roof requires additional air terminals 50 feet-on-center through the field of the roof. Air terminals are also required on rooftop equipment that is not within the zone of protection of an air terminal mounted higher on the structure. The rolling sphere technique is demonstrated in an animation at bit.ly/rolling-sphere. 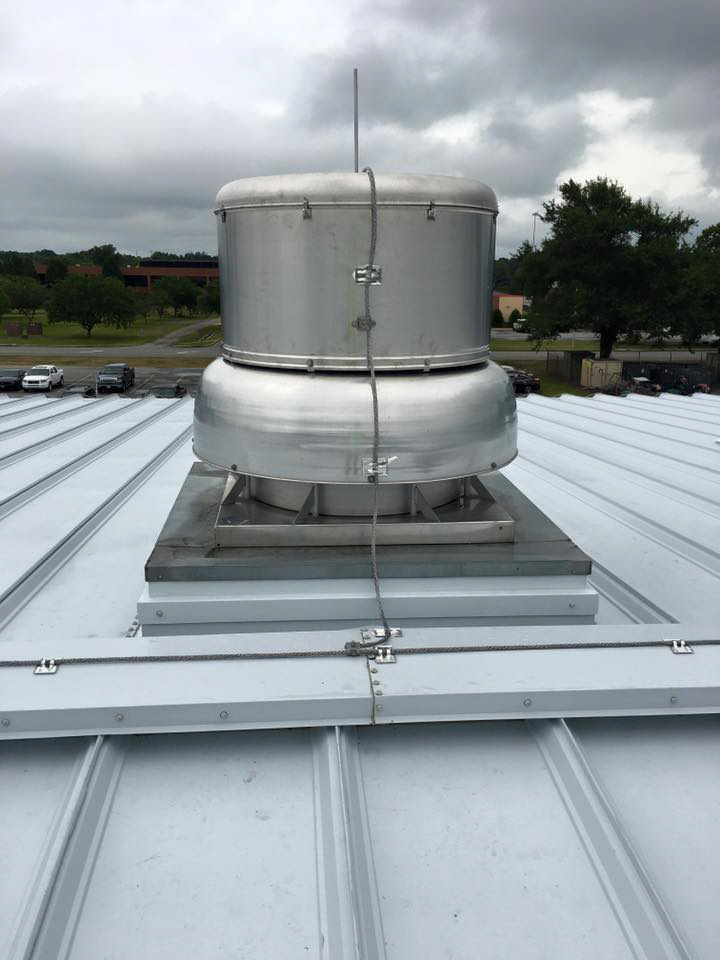 In most buildings, lightning’s energy is conveyed from air terminals to the ground through large, multi-strand cables made from highly conductive grades of aluminum or copper; copper should not be used in contact with galvanized steel, aluminum, or most other non-cupreous metal roofing or siding. The cables must interconnect air terminals and bond to metal elements on the roof.

A wide variety of air terminal bases and cable fasteners are available for installing LPS components on metal roofs. Screw-installed devices can sometimes be used on ridge caps, and adhesively-mounted devices are available that avoid drilling holes through the roof. On better-quality buildings and in high wind areas, devices that clamp onto a roof’s standing seams should be considered. Ideally, the LPS is installed during construction, with all conductors installed below the roof deck, so just the air terminals are exposed above the roof. 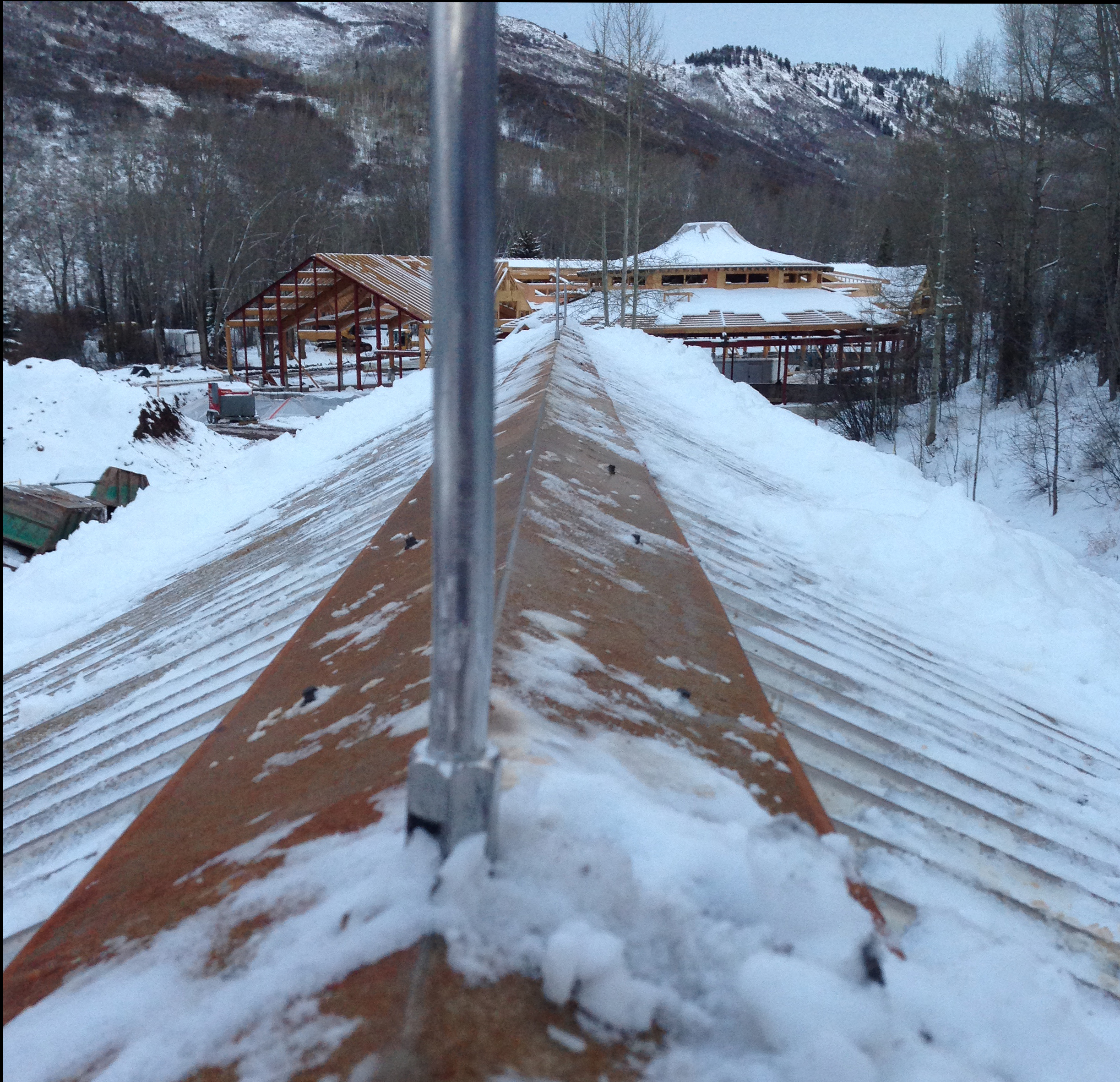 From the roof, NFPA requires paths to ground. Down conductor cables from roof to grade can be left exposed to minimize penetrations through the building envelope. The visual impact of exposed cables can be reduced by locating down conductors away from main entrances, behind downspouts, and along a building’s edges or other architectural lines. Large radii are required wherever a cable bends, including at the junction of a roof and wall. 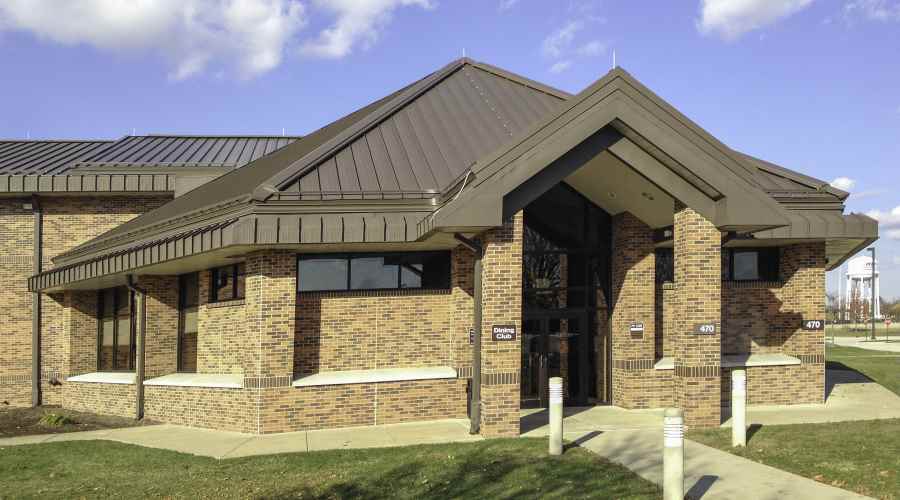 Alternatively, through-structure penetration devices can be used to bring conductors into the building interior; conventional flashings can be used to seal the penetrations. This reduces the visibility of conductors on the exterior of the building and helps protect them from damage and theft. More, this can reduce costs by allowing a building’s structural steel framing (if present) to be used as down conductors. NFPA states: “The metal framework of a structure shall be permitted to be utilized as the main conductor of lightning protection system if it is equal to or greater than 3/16 inches (4.8 mm) in thickness and is electrically continuous, or made electrically continuous…” 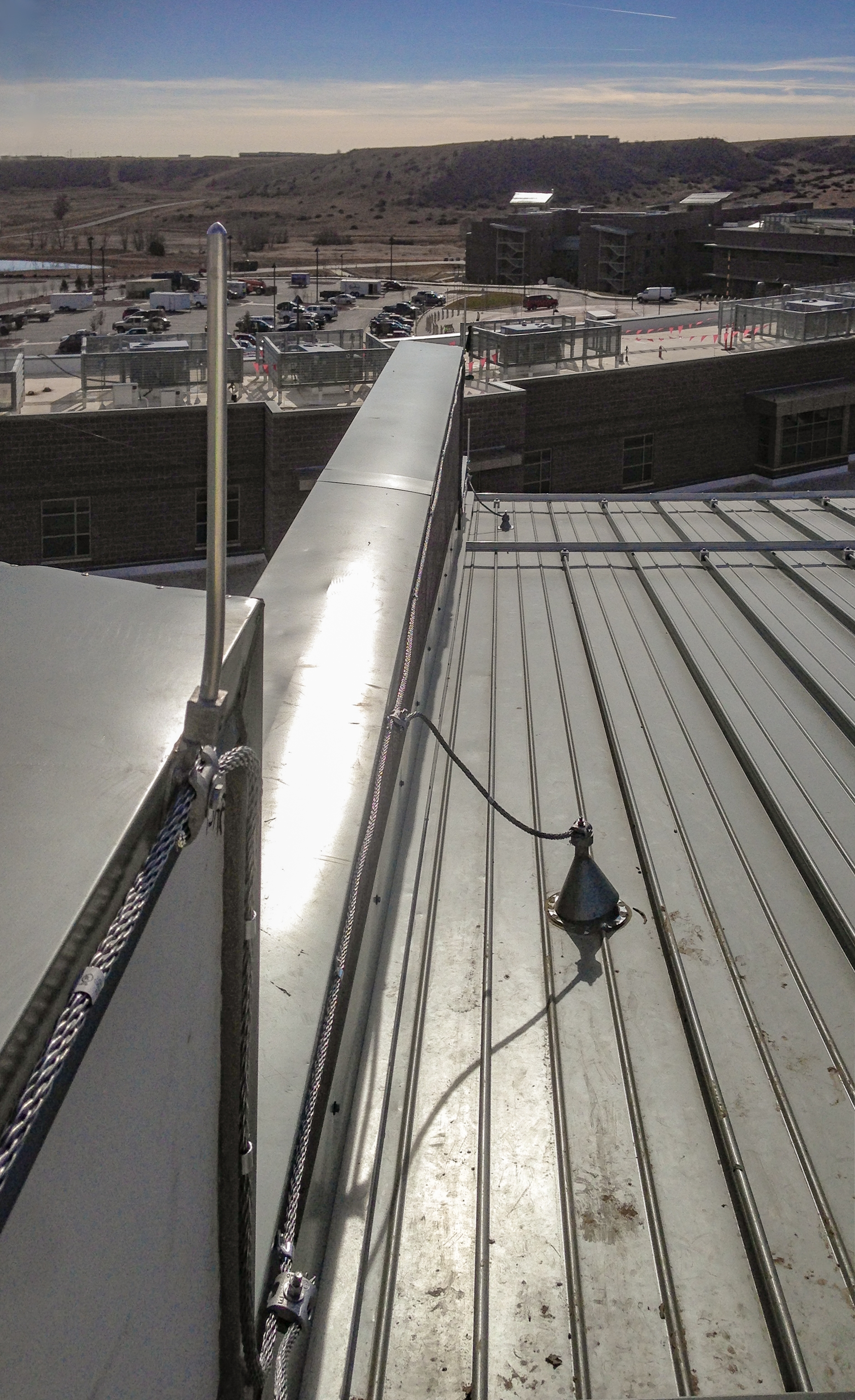 Seeking the path of least resistance from sky to ground, lightning will arc or side-flash from conductors into electrical, plumbing, HVAC, structural members, and other metallic systems if electrical potential is not equalized between all grounded systems. Similarly, LPS requires its own grounding system that must be bonded to other grounding systems, such as the ground for the building’s electrical power.

Air terminals are not highly visible from the ground. Aluminum air terminals can be as slim as 1/2 inches diameter, just 10 inches tall and set up to 24 inches in from roof edges. Light colored air terminals reflect and blend into the sky. Exposed cables on the roof should be located on the less visible face of a roof and against the ribs in metal roofing to minimize visibility.

Finally, we must recognize that metal roofing has to protect a building against rain, wind, snow, sunlight, and other meteorological conditions. When installed in conjunction with an LPS, metal roofing can also withstand lightning, one of nature’s most dangerous hazards.

Note: Some of the photos used in this article have been enhanced to make lightning protection equipment more visible. In actual installations, the thin air terminals are often difficult to see from normal viewing distances.

Jennifer Morgan is co-owner of East Coast Lightning Equipment and can be reached via www.ecle.biz.

Michael Chusid, RA FCSI is an expert in building products and can be reached via www.chusid.com.