CetraRuddy, the award-winning architecture, planning and interior design firm, has been commissioned for the new design and repositioning of 540 Broad Street in downtown Newark. The project - an adaptive reuse of the original landmarked New Jersey Bell building by acclaimed Art Deco architect Ralph Walker - will consist of approximately 260 units of housing, including affordable housing, as well as 60,000 square feet of office, retail and other nonresidential uses. It is among the largest conversion projects underway in Newark, a fast-growing market for residences and commercial space.

The developer, 540 Broad Street Owners LLC, with support from L+M Development Partners and Prudential Financial, Inc., will reimagine the 436,000-square-foot tower at the corner of Lombardy Street and Broad Street in Newark, while also preserving its historic character. The 1929 building was designed for the New Jersey 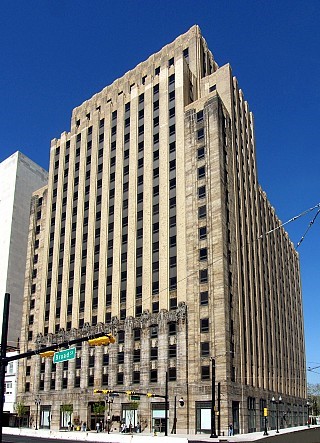 Bell Telephone Company by Ralph Thomas Walker, who was hailed in The New York Times as the “architect of the century.” In 2005, the building’s exterior and majestic lobby were added to the U.S. National Register of Historic Places. The handsome brick-and-sandstone building has been home to the regional offices of Verizon, which will remain in the building.

“This is an incredible landmark of this city and a national treasure, and we are delighted to help bring it new life,” says John Cetra, AIA, Founding Principal of CetraRuddy, which is the architect for award-winning adaptations of two other Ralph Walker buildings, both in New York City: Walker Tower and Stella Tower. “For Newark, this visionary project brings new vibrancy and economic vitality to Newark’s downtown center, while also preserving its renowned historic character.”

“The 540 Broad Street project reinforces our recent investments in Newark, which include the Hahne & Company department store also on Broad Street," said Jonathan Cortell, Vice President of Development for L+M Development. "The building occupies a pivotal location on Washington Park and we are proud to be a part of the next chapter in this history of this important site."

The design team announced for the project includes CetraRuddy as lead architect and designer as well as Inglese Architecture and Engineering as executive architect. CetraRuddy brings successful conversions of Ralph Walker buildings, the only firm having converted more than one of this legendary architect’s work, in addition to the adaptive reuse of other landmark and historic buildings such as the Barbizon Hotel, 141 Fifth Avenue, the Stanhope Hotel and 443 Greenwich, all in New York City. The engineering firm Rodkin Cardinale has been named to design the adapted building’s mechanical, electrical and plumbing systems. According to the architects, a telephone switching station on the building’s fourth floor will remain in place and continue to operate during and after the construction phase.

Construction of this important and highly anticipated residential offering in an iconic and historic structure is expected to begin after all the necessary approvals are received, according to 540 Broad Street Owners.

“This new revitalized residential urban hub is a thoughtful and valuable approach to invigorating the Newark downtown neighborhood and creating a robust commercial district,” says Nancy J. Ruddy, founding principal of CetraRuddy. “Our design will emphasize the refurbishment of the building’s façade to create an exciting pedestrian experience while reinforcing the existing community in many ways and restore a landmark building that reflects the great history of Newark.”

CetraRuddy Founders Named to Board of Architecture School