Dennis Ryan believes in taking the long view when it comes to his business. Ryan is the president of Waterproofing Associates, a commercial-industrial roofing and waterproofing contractor headquartered in Mountain View, Calif. He is also the current president of the Western States Roofing Contractors Association (WSRCA).

Ryan believes long-term thinking ensures top-quality workmanship and provides numerous benefits, including great referrals from clients and an energized workforce with minimal turnover. The attitude is perfectly suited for the roofing and waterproofing industry, which places a premium on doing things right the first time. When experts estimate that the building enclosure accounts for roughly 20 percent of the cost of a project, but building enclosures represent approximately 70 percent of building damage claims, you get an idea of how difficult designing and constructing the building envelope can be. Repairs are by definition disruptive and costly, so minimizing risk is the top priority.

Fixing a problem might sting in the short run, but it will pay off in the long run, according to Ryan. Looking back at his 40 years in the industry, he sees proof that long-term thinking not only puts business decisions in perspective — it drives people to keep learning and growing. 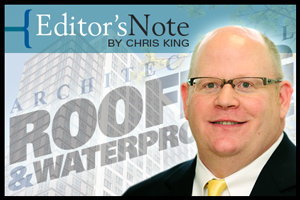 He sums up the commitment to continual improvement as a “never arrive” attitude. Ryan believes people who think that they’ve arrived — that they’ve reached the pinnacle of their profession — are making a crucial mistake. “You do that and you’re finished,” he said. “You’re done. You’re not going to keep up with that cutting edge.”

“Never arrive” has become something of a company motto at Waterproofing Associates, and when someone falters, the toughest criticism one can level is to say, “I see symptoms of arriving here.”

On his birthday last year, Ryan’s sons presented him with a gift that now hangs in his office: the original hammer he used in 1974 on his first roofing job back in Yonkers, N.Y. It’s framed below a brass plate that reads “Never Arrive.”

Content Is King: Separating Facts From Myths When it Comes to Cool Roofing

Content Is King: Are You on the Right Road?

From the Editor's Desk: Everything You Ever Wanted to Know About Sustainable Roofing

Fluid-Applied Air Barriers: Taking You Behind the Façades