Assigning the Design of a Complex System

Delegated design encompasses portions of a design that are to be completed by the contractor or its subcontractors. Typically these include specialty systems and components including, but not limited to, precast concrete components and curtain wall systems. Delegated design can be appealing due to reduced costs, improved schedules, and the expert knowledge possessed by specialty designers. However, lines between the design and contractual responsibilities of the licensed designer of record (prime) and delegated designers often become blurred.

This confusion can lead to problems during construction and disputes over who is liable for flaws or failures. To add further ambiguity, licensing boards are also inconsistent in how they view the responsibilities of prime versus delegated designers, and building departments vary widely in their approval processes for delegated designs. Luckily, proper specifications can provide clarity regarding design responsibility and submittal requirements. Throughout this article, the authors will discuss the promises and perils of delegated design, and highlight ways for building envelope professionals to promote a complete and code conforming final product.

In these states, the liability for any problems arising around a “delegated” design element remains with the prime designer. Whether or not they maintain a hard policy for delegated design, all states require licensed design professionals to hold paramount the health, safety, and welfare of the public. Their responsibility to the public should guide how the prime designer approaches the delegated design process.

According to standard AIA contract language, Contractors only have a duty to provide architectural or engineering design services when specifically required by the contract documents. Where these services are required, all performance and design criteria must be specified by the project designer of record.

The standard contract language also states that the project designer of record is only required to check submittals for conformance with information given and the design concepts expressed in the contract documents. Therefore, typical specifications for a delegated design include performance requirements for the delegated item. But are the typical specifications sufficient to prevent problems?

Where some, but not all components of a building envelope are delegated, there are naturally interfaces between delegated items and neighboring components which may be delegated to a different specialty designer or designed by the prime designer. For example, consider the case of a metal panel cladding system and adjacent windows whose designs are delegated to separate entities (Figure 1). Suppose the construction documents are clear as to who is responsible for the design of each component, but neglect to mention the interfaces in between. Both delegated designers may indicate “seals to be designed by others” in their respective shop drawings. The lack of a complete design could result in a leaky building.

Another common problem can arise when the prime designer delegates the design for a curtain wall system and its connections to the primary structure (Figure 2). The construction documents may list typical performance requirements and design criteria, including deflection limits and anticipated loads. But, if the prime designer assumes that the curtain wall gravity loads will be supported by the primary structure at each floor, while the delegated designer assumes every other floor, there could be a serious impact on the structural system of the building as a whole. 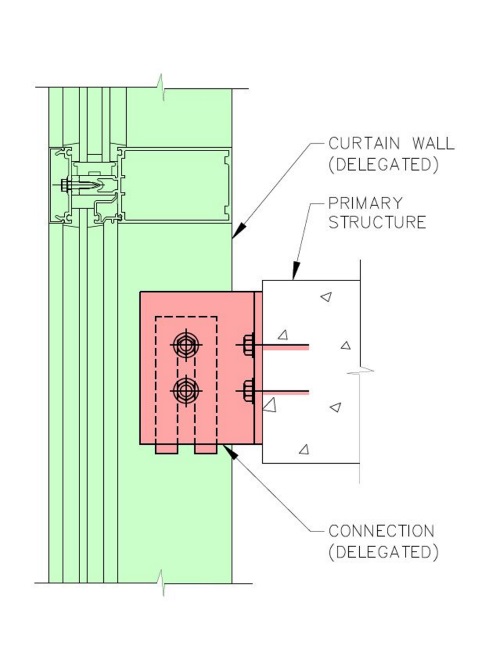 When omissions and inconsistencies in the design aren’t caught until the construction phase or after building occupancy, they lead to delays, added costs, and in some cases accidents and loss of life; all of which result in conflict over who is at fault. Additionally, if the owner was not aware that the project included delegated design elements, the prime designer’s lack of transparency could cause a misunderstanding and loss of rapport with their client. 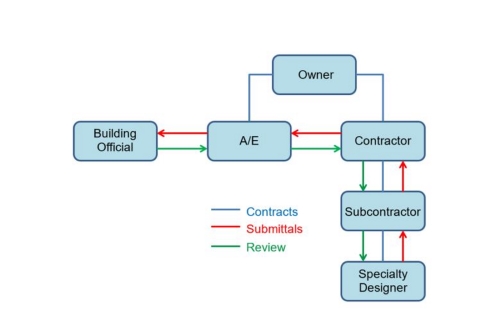 Once complete, deferred submittal documents must be received and approved by first the prime designer and then the building department prior to installation of the deferred items. Despite the clear framework given in the IBC, the approval processes that local building departments use in practice are inconsistent. The authors inquired into the procedures followed by building departments throughout the United States (responses are summarized in Figure 4). 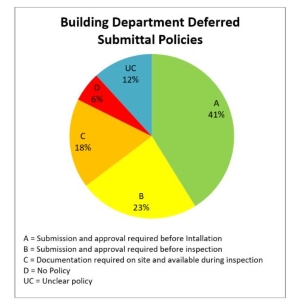 Of the building departments responding, only about 40 percent require deferred submittals be received and approved by the designer of record and the building official prior to installation. Due to a lack of time and resources, some building departments do not review deferred submittals at all. In these jurisdictions, if the designer of record does not review the submittals themselves, key building components might be installed without any verification that the design was prepared by a duly licensed design professional and conforms to the project requirements.

Fortunately, when all parties are well informed and proper precautions are taken, the delegated design process can benefit everyone involved. Due to reduced design responsibilities, the prime designer is able to offer more competitive design fees, appropriately assign these design responsibility to a specialist and take on a higher volume of projects.

By focusing on one particular building system, specialty designers become experts in their fields and are capable of delivering a higher quality final product for their portion of the project. And because they are involved in the design from the beginning the contractor is able to operate on an abbreviated construction schedule. Each step of the way the owner benefits from reduced costs, improved quality, and saved time.

Kurt Hoigard, P.E., SECB, F.ASTM is President of Raths, Raths & Johnson, Inc., a national engineering, architecture, and forensics consulting practice. He is a leading industry expert with 34 years of experience specializing in the investigation and repair of distressed and deteriorated structures and the performance of building materials and systems. He consults in the areas of peer review, facade leakage, material failure evaluations, construction quality assurance, and collapse investigations, and expert witness testimony on a range of matters. A licensed P.E. in more than 30 states, Kurt is a Fellow of ASTM International.
Demetria Boatwright is a structural engineering intern at Raths, Raths & Johnson, Inc., a national engineering, architecture, and forensics consulting practice. She has experience with a variety of projects involving condition assessment, field investigation, forensic research, and documentation of structural components and systems, and distressed buildings. She is a member of the Construction Specifications Institute, Chicago Chapter and received both her Master of Engineering in Structural Engineering and Bachelor of Science in Architectural Engineering from Illinois Institute of Technology.

The Art of Renovation for a California Casino Clad in EIFS

The Design of High-Performance Buildings

A Total Look: The Power of GIS, 3D BIM Together