Newly licensed architects are a more diverse group than ever before—and the same is true for those in the profession who are on a path to licensure. 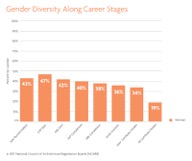 Numbers, an annual publication that provides insights into the architecture profession using robust data collected by the organization.

Additional key findings from the 2017 NCARB by the Numbers include: