Achieving net zero (meaning net-zero energy consumption and zero carbon emissions annually) is an ambitious goal–-one that many say cannot be achieved on U.S. military installations with the technologies available today. The United States Coast Guard (USCG), however, recently proved this goal is well within reach at three of its sites in Puerto Rico. With HVAC and lighting retrofits, photovoltaic (PV) installations, and other energy conservation measures, these USCG sites are on the fast track to net-zero status. 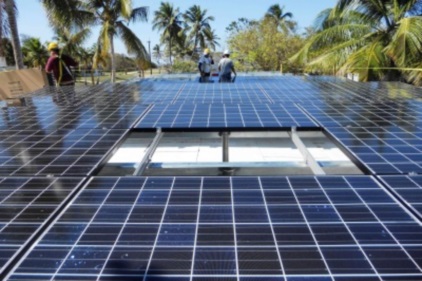 Through this collaboration and commitment at all levels of its organization, along with the willingness to push the envelope in technologies and public-private partnerships, the USCG is now well on its way to achieving net-zero status.

This project has offset 85 percent of the electrical load from the grid at Air Station Borinquen, and nearly 60 percent of the load at Sector San Juan and Rio Bayamon housing in Puerto Rico. The results whet the Coast Guard’s appetite for more, and the agency has set its sight on net-zero status.

What makes this achievement even more distinctive is that it was accomplished without any upfront capital from the USCG. To realize its energy and sustainability goals amidst a constrained budget, the Coast Guard utilized private sector financing through a first-of-its-kind Renewable Energy Services Agreement (RESA). This innovative financing method is based upon third-party ownership of the renewable energy assets, within the Department of Energy’s ESPC contract, to capture various tax incentives and renewable energy credits.

Making Net-Zero Attainable for Federal Facilities
In his December 2011 memorandum, President Obama encouraged agencies to enter into $2 billion of performance-based contracts in federal building efficiency projects within the following 24 months. Agencies listened and jumped at the chance. Private financing solutions like the ESPC and RESA are paving the way for agencies to undertake comprehensive projects that include the combination of short- and long-term ECMs necessary to achieve net zero.

Schneider Electric has seen a huge uptick in the requests for privately financed energy projects within the last six months. Agencies can choose from many private sector investment tools beyond ESPCs, such as power purchase agreements (PPA) and utilities energy service contracts (UESCs) to achieve their energy objectives. These financing tools allow agencies to fund their energy upgrades through the dollar savings they generate and leverage third parties to own renewable energy assets and monetize various credits.

“Federal agencies are embracing the challenge set forth by the president last year,” said Jeff Sherman, director, Federal Energy Solutions, Schneider Electric. “They recognize that ESPCs and other private sector financing tools are crucial if they are to achieve their energy goals in these fiscally lean times. And, they recognize that meeting those goals is not just about saving money and being good stewards of the environment, but also increasing resiliency to sustain their mission.”