Although we sometimes discuss roofing as though surface reflectivity is the only consideration, in reality it’s just one element in the overall design. Roof reflectivity can have a significant impact on a building’s energy efficiency, so making the proper roofing selection is important. Several key energy-related factors are often overlooked, however.

The first of these factors is electrical demand charge. Demand is a kilowatt measurement of the highest usage of electricity in any single 15- (or sometimes 5-) minute period during a monthly billing cycle.

In essence, demand charge represents the cost that electric companies charge for generation or transmission equipment that remains idle except during periods of peak usage. It’s a bill for electrical power that could be used instead of what is actually used—like being charged for driving at your vehicle’s top speed, even if you did so for only a few moments that month.

Businesses want steady, predictable customers; electrical utilities are no different. A peaking load is their way of giving their customers a speeding ticket, and they bill extra for it—sometimes dramatically so. Demand charges can be as high as $900 per kW, and it’s not uncommon for demand to represent as much as 80 percent of a facility’s electrical bill.

Now how does this relate to cool roofing? Electricity is used to power almost all conventional cooling equipment. Consequently, the highest loads tend to occur on hot, humid days—as much to provide a dry environment as a cool one. The hottest five to seven days of the year can affect a facility’s energy bill for an entire season, meaning a reflective roof can be a wise choice farther north than one might assume. Climates like Boston and Chicago have plenty of hot, humid days; simply waiting two more hours to turn on that backup A/C unit can make a big difference in energy costs. Therefore, if the facility is subject to a demand charge, that demand charge should always be considered in modeling cool roofing.

The seasonal difference between interior and exterior temperatures is also a very important factor in choosing the right roof assembly. In practice, this kind of weather data is distilled to Heating Degree Days (HDD) and Cooling Degree Days (CDD). This complex-sounding and often misunderstood concept is actually quite simple: It’s the average difference in degrees from the temperature outside versus the set temperature on the thermostat each day multiplied by the number of days in the heating season. (It’s a multiplication similar to man-hours.) Therefore, HDD and CDD are based on the difference between a target “comfortable” interior temperature (usually 65 F) and the average exterior temperature for each 24-hour period.

Since overnight temperatures tend to be lower, it’s common even in warmer climates like Atlanta to have more HDD than CDD. (In fact, Atlanta had about 3,400 HDD and 1,700 CDD in 2013, according to degreedays.net.) Many erroneously assume that if there are more Heating Degree Days than Cooling Degree Days in a given climate, a cool roof does not make sense.

The reason comes back to demand charge and the fact that cooling is a peaking load that tends to generate demand charges. For example, I recently reviewed the energy bills for a large office building in metro Boston. The July electric bill was $20,000, and $16,000 of that was demand. Even though Boston has far more HDD than CDD, this particular building, likely due to its dark-colored building envelope, high occupancy rate and large amount of exterior glass, still paid more for cooling than it did for heating. 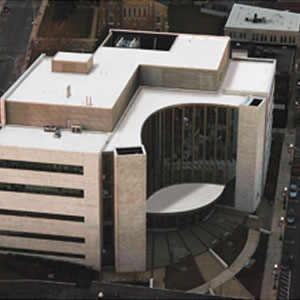 When attempting to cool buildings, you are inherently working against the heat generated by internal equipment and human activity. In commercial buildings, internal heat sources (such as lighting, equipment and people) can substantially reduce the need for heating in winter and increase the need for cooling in summer. Therefore, Heating Degree Days tend to overestimate annual heating load and annual hours of HVAC heating operation while Cooling Degree Days tend to underestimate annual cooling load and annual hours of HVAC cooling operation. The relevance here to cool roofs is that a cool roof is beneficial during daylight hours when the HVAC is cooling the building (underestimated by CDD65F), and detrimental during daylight hours when the HVAC is heating the building (overestimated by CDD65F).

Consider a server farm in Winnipeg, Manitoba, Can. Clearly, Winnipeg (known to locals as “Winterpeg”) is cold. And, like much of Canada, it has fairly desirable electricity rates. Given these factors, a dark-colored roof, harvesting as much heat as possible to reduce winter heating expense and benefiting from a low cost of electricity for summertime cooling, would seem to make sense. However, banks of computers generating massive amounts of heat can change that equation. Because the building’s function generates so much “free” heat, and many data centers are now able to capture this heat for use in the non-data hall spaces of the building, occupant behavior in this case is effectively reducing the number of Heating Degree Days. That makes cooling, and a building envelope that rejects solar gain, possibly a wise choice even in this far-northern climate. To be sure, data centers are an extreme example, but internal and solar heat loads affect all buildings.

Extreme occupant behavior can be found in refrigerated buildings, which are used in the food distribution industry and are typically held at -10 F. Regardless of location, a refrigerated building will clearly benefit from the most-efficient building envelope possible with low solar heat gain. A refrigerated building benefits from both a reflective envelope and a well-insulated envelope; in fact, reducing the envelope temperature will increase the thermal resistance of the insulation.

Occupant behavior can be a factor on the heating side as well. Consider a school that closes (or only cools a few rooms) in the summer. This facility might well have lower summer utility costs and want to focus on winter heat gain, even if it’s located in a warmer climate.  If a building is never occupied during the cooling season, increasing roof reflectivity won’t lower its energy bill.

Modeling roof assemblies can be a daunting task. The Roof Savings Calculator, available at roofcalc.com, does not include demand charges (and as of this writing warns users that its results are under investigation), so it is probably not the best choice. CoolCalc, available at web.ornl.gov, together with its add-on CoolCalcPeak, does include demand charges. However, CoolCalc and CoolCalcPeak can be time-consuming to use, requiring the user to model roof assemblies one by one, print them out and manually subtract results in order to make comparisons. To help address this issue, GAF has built a free calculator interface called CREST, the Cool Roof Energy Savings Tool (available at cool.gaf.com) which combines results from CoolCalc and CoolCalcPeak in an easy-to-use format that allows comparison of multiple roof assemblies and HVAC equipment efficiencies. This makes it easy to compare roof reflectivity and insulation R-value, and also to model upgrades to HVAC equipment—all while considering demand charges. Any of these calculators are for comparison purposes only and will give only directional results, but they can help evaluate the return on investment of additional layers of insulation and help determine whether a cool roof makes sense.

Additional insulation makes sense for practically every project, regardless of climate, because insulation saves in both heating and cooling. In fact, if a project has less than R-40, additional insulation should be modeled, and not just in northern climates. Typically, the best return on investment is somewhere between R-20 and R-30 combined with a cool roof. This combination helps reduce demand charges and is enough insulation for the cool roof to result in only a mild wintertime heating penalty.

Finally, if a client is pursuing a LEED, ENERGY STAR or Green Globes certification, site factors such as the urban heat island effect are a consideration. A high-efficiency building envelope is typically rewarded by these green building rating systems. This may be of particular interest if the building will be sold in the near term because it has been shown that green building certifications increase appraised values.

Combine all of these factors with the fact that in many situations there is little to no additional cost for selecting a reflective membrane, and it’s obvious why cool roofing has continued to grow so dramatically. It’s even been shown that solar PV panels are more efficient when they are cooler—so if the roof is intended to be “solar ready,” a cool roof can help.

Reroofing is a phenomenal opportunity to improve a building’s energy performance, but one should not infer that every building should have a cool roof. It’s just that the optimal energy efficiency achieved by selecting a reflective building envelope that rejects solar heat gain occurs farther north than one might initially guess. A thoughtfully selected and well-designed roofing assembly can generate savings that can outpace the cost of the re-reroofing project—and cool roofing is increasingly part of that equation.

Martin Grohman, LEED AP, is executive director, sustainability at GAF. In this role he is responsible for both internal and external sustainability initiatives such as promoting roofing recycling, energy training initiatives for contractors, and the company’s Zero-Waste-to-Landfill programs. He is also GAF’s representative to the U.S. Green Building Council’s LEED User Group

The Drawing Board: Cool Reflective Roofs are Energy Smart in All Geographies

Are You Ready for the Newest Benefit in Cool Roofing?

Keep Your Building Cool in Summer with a Cool Roof